‘For a child has been born for us,
a son given to us;
authority rests upon his shoulders;
and he is named
Wonderful Counselor, Mighty God,
Everlasting Father, Prince of Peace.
7His authority shall grow continually,
and there shall be endless peace
for the throne of David and his kingdom.’

It was on a night just like this one,
colder, perhaps, but still dark.
The soldiers of the British and German Empires,
at war for five months now,
huddled in their trench lines
in northern France and Belgium.
A thin strip of land separated the trenches;
if a soldier should venture into this ‘no man’s land,’
he would not live long.
And so life continued in the trenches;
the shots of either side’s snipers,
the occasional artillery barrages,
the cold and the mud
and the standing water and the trenchfoot.
A night like this one,
a hundred years ago tonight,
December 24, 1914. 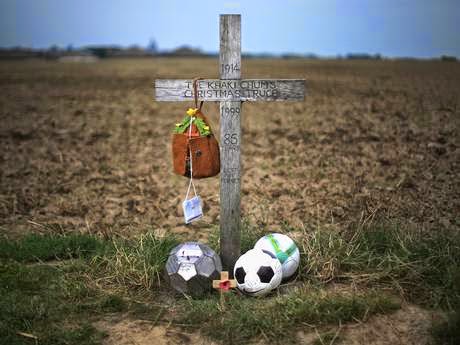 On that Christmas,
German and British soldiers,
not in all places, but in many,
came out of the trenches
into no man’s land.
No shots were fired
and no one died.
Instead, gifts were exchanged;
helmets, tobacco, and alcohol,
and in some places the men of the armies
got up impromptu soccer matches.
The peace allowed the men to bury their dead,
and in one place at least a common service was held.

When the day was over and dark had fallen,
the troops retreated to their trenches,
and serenaded each other with Christmas carols
from their native lands.
An English soldier wrote home:
‘Dearest Mother… I think I have seen today
one of the most extraordinary sights that anyone has ever seen.’
It has gone down in history as ‘The Christmas Truce.’
A night like this one; a hundred years ago tonight.
A silent night, a holy night.

It did not last long.
The officers of the opposing armies were not amused.
and within days, the men of the armies
were back shooting at each other.
In future years, orders sternly forbade
any such fraternization with the enemy.
There were a few truces in 1915,
but by 1916 so many men had died
that attitudes had hardened.
The gods of war demanded hatred.
37 million civilians and military personnel
died in the First World War.
But on a night a hundred years ago tonight,
peace on earth. Good will toward men.

We do not know if any religious sentiments
or theological ruminations
propelled the men towards each other.
Quite probably, they were just sick of war,
sad to spend Christmas away from home,
and had not learned this soon in the war
to dehumanize their enemies.
But we read these texts:
‘All the boots of the tramping warriors
and all the garments rolled in blood
shall be burned as fuel for the fire.’
‘Glory to God in the highest heaven,
and peace on earth among those whom he favors!’
We read these texts
and we believe that for one night at least,
the Empires of earth,
the King and Kaiser,
took their place below the Prince of Peace
who was born in the city of David
to bring the Kingdom of God.

The prevailing narratives of our lives,
the stories with which we are saturated,
are of conflict and division.
Division between the police and the policed.
Conflict between women and men,
black and white,
liberal and conservative.
Division within families,
conflict within ourselves.
The gods of war, with whip and bridle,
ride us and spur us on
to declare our allegiances,
to swear no peace between us and them.

that on a night like this one,
some two thousand years ago,
a child was born for us,
a Son given to us,
authority rests upon his shoulders.

The gods of war shall not have the final say.
Over the angry rhetoric
and the crushing guilt
and the mute frustration
is an angel calling,
‘Good news of a great joy for all people!’

We can and do wonder
whether or not this great joy,
this peace on earth,
is not just a wish-dream
and not a reality.
We can and do wonder, if this Child was born to bring peace,
why we see so much war,
and why even in our own lives
the battles do not cease.
But is it not possible
that authority indeed rests upon the shoulders
of the one who was born in Bethlehem,
and that human beings do not recognize it?
It is indeed possible
that the reality of life is the peace which Christ brought,
and we human beings prefer our fictions.
It is truly possible
that the British and Germans meeting together
in no man’s land one hundred years ago
were, for at least one day,
putting aside the dreams of the world
for power and glory and fortune;
for at least one day living out the angel’s good news.

And it is precisely because all of us
live in these fictions
and in a world dominated by the gods of war
that this Child was born among us,
taking on our flesh.
And he grew up and he took on our sin
and he conquered it,
he bought us not with silver and gold
but with his holy and precious blood
and his innocent suffering and death.
Even in a world at war,
the gods of war are not our lords.
The God of the world is the prince of Peace.
The kingdom of this world
has become the Kingdom of our Lord,
and of his Christ,
and He shall reign forever and ever.

Tonight,
come out of your entrenchments.
take your fictions and your fears,
your sins and sufferings,
and lay them down before this Child.
Lay down your arms of denial and doubt,
defiance and defensiveness.
Rejoice in the reality of the forgiveness of your sin,
and the final destruction of death.
Once again declare your allegiance
to this Kingdom; this Prince of Peace.
One hundred years ago tonight,
peace came to the trenches.
Tonight, let peace come to you;
the peace of God that passes all understanding
to keep your heart and mind
in Christ Jesus our Lord.