In the waning days of 1968,
a few weeks before the launch of the mission
which would send human beings to orbit the moon for the first time,
Frank Borman, the mission commander,
was told by a NASA public-affairs official
that on Christmas Eve he and his fellow crew members
would have the largest audience that had ever listened to a human voice.
And then the official said,
‘So say something appropriate.’

Borman and his fellow astronauts Jim Lovell and William Anders
were pilots by trade, not poets.
They tossed around several ideas.
They were men of faith,
so they considered a specifically Christian holiday message.
Discarding that, in view of the world audience of many faiths,
they thought maybe a story about Santa Claus
or re-writing the words to ‘Jingle Bells.’
Those ideas were rejected too.

Finally Borman asked a friend, who asked another friend,
Joe Laitini, who had been a speechwriter for Presidents Kennedy and Johnson.
He told his wife, Christine, about the problem,
and worked on it all night without success,
searching through the New Testament for something appropriate.
At 3:30 a.m. Christine came downstairs and said,
‘Why don’t you begin at the beginning?’
The words that had come to her would be typed on a piece of fireproof paper,
and the page inserted on the back of the flight plan,
to wait until Christmas Eve.
No one but the Laitinis and the astronauts themselves knew what it was they would say.

The astronauts were not trying to evangelize the world fifty years ago tonight,
but the words they spoke were words of faith.
Both their words and the words of the angels that Luke records
witness to a God who brings light from darkness,
life from death, speech from silence.
a God who created the universe and still sustains it,
and a humankind that by grace
can receive God’s kindness and respond to it.

And for many of those who heard the message,
their response was like that of the shepherds long ago.
The wonder brought them up short,
stopped them from their work,
turned their eyes to the skies,
filled them with awe,
for truly they had never seen or heard anything like this before.
The messengers from the heavens proclaiming the goodness of God’s creation,
and giving a blessing to them before falling silent.
The world, the universe itself became enlarged.

Off-duty Flight Director Eugene Kranz would write,
‘For those moments, I felt the presence of creation and the Creator.’

A guest at a party
remembered the emotion of his host,
the conductor Leonard Bernstein,
listening to the final words of astronaut Borman
with a look described as ‘depthless and inexpressible.’ 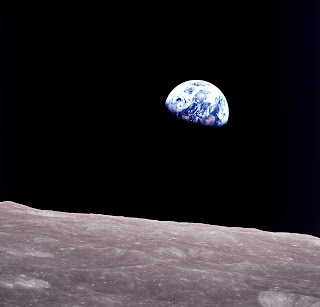 To listen to the Apollo 8 broadcast,
again or for the first time, from the distance of 50 years,
or to view the famous photo of Earthrise,
with the dead moon below
and the inky vastness of space
surrounding the life-giving Earth,
is to feel the awe and wonder anew.
This awe and wonder leads to deeper questions.
Certainly how?
This is the domain of science.
But there is also the question, why?
This is the domain of faith.

St. Luke tells us
that on another Christmas Eve much longer ago,
there were other messengers
sent to give a message to people of the earth.
One rather whimsically wonders whether a higher-up angel said,
‘Say something appropriate.’

This is what they said:
‘Do not be afraid.’
‘Good news of a great joy for all people.’
‘To you is born a Savior.’
‘This shall be a sign for you.’
‘Glory to God in the highest heaven,
peace on earth.’

If the messengers of Apollo 8
reminded us that Creation itself was a miracle,
then the messengers of Bethlehem
told us that the Creator was saving us from what we had made of the miracle.
That though we had turned away from awe and wonder,
awe and wonder was coming among us still.
That the Creation does not belong to the tyrant and the thief,
but still to the Creator and those on earth with whom he finds favor.
That human beings might find their place in the creation,
in adoration and service of the Creator.

For awe and wonder do not exist for themselves,
but for adoration and service.

In the Bethlehem child,
we behold the creator become creation,
the eternal Son of the Father
stepping into time, into the universe.
If we can grasp the miracle of the living planet
upon which we live our brief lives,
then we may also be able to grasp by faith
this teaching, that a child who was born into the universe
was the one through whom the universe was created.

Beholding Earthrise, we ask ourselves,
was the world created by chance or caprice,
for the powerful and mighty to take,
or through Christ and for Christ,
for the humble and meek to receive?
Both are incomprehensible to our minds,
which means either may be true.
The picture alone does not tell us,
nor does simply seeing a baby.

086:06:40 Anders:
We are now approaching lunar sunrise, and for all the people back on Earth, the crew of Apollo 8 has a message that we would like to send to you.

086:08:07 Borman: And God said, "Let the waters under the Heavens be gathered together into one place. And let the dry land appear." And it was so. And God called the dry land Earth. And the gathering together of the waters called he seas. And God saw that it was good.

And from the crew of Apollo 8, we close with good night, good luck, a Merry Christmas and God bless all of you - all of you on the good Earth.


Glory to the Newborn King! 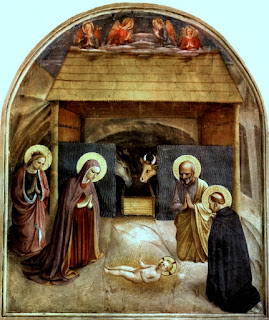 Get new posts by e-mail