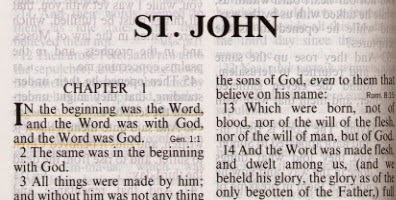 We read that this babe in the manger
is far superior to angels.
We hear that God does not say to the angels,
‘You are My Son; today I have begotten you!’

The letter to the Hebrews goes on and on like this.
The author seems to delight in putting everyone and everything in its place.
The prophets; angels; Moses; the Torah; the Temple -
everything must take its place in relation and subjugation to the Son
who entered the world as a human child.

This Son of God does not sound much like a human being to us.
Hebrews puts it like this:
‘In these last days [God] has spoken to us by a Son,
whom he appointed heir of all things,
through whom he also created the worlds.
He is the reflection of God’s glory
and the exact imprint of God’s very being,
and he sustains all things by his powerful word.’

The Son of God participates in the Father’s work of creation.
The angels, from the cute cherubs
to the powerful St Michael with a sword,
to the archangel Gabriel with his trumpet,
to the angel who sang over Bethlehem
the good news of great joy,
are creatures.
Being pure spirit, they worship God and they serve God.
And in worshiping God, they worship him
when he comes into the world as a human being.
When we see a particularly cute baby,
we’re apt to say,
‘Oh, what a little angel!’
To which the parents may respond,
‘Oh, really?
You can have him for a couple of nights.
See what you think then.’

And yet, the children
resemble not so much the angels
as they do the Son of God,
the Word of God,
through whom God created the worlds.
For the Word of God became one of them,
becoming incarnate for them.
The one who created the spiritual beings
becomes an animal,
becomes a human being for their sake,
to raise them up to the things of God.

There are many who believe that human beings
are simply a class of animals
who have evolved to a higher state
than the other animals.
If this is true,
whether we are really more advanced
is perhaps a matter of opinion.
Douglas Adams gently pokes fun at us
in The Hitchhiker’s Guide to the Galaxy:
‘Man had always assumed
that he was more intelligent than dolphins
because he had achieved so much —
the wheel, New York, wars and so on —
whilst all the dolphins had ever done
was muck about in the water having a good time.
But conversely, the dolphins had always believed
that they were far more intelligent than man —
for precisely the same reasons.'
If evolutionary status is the yardstick,
perhaps we’ve got nothing to brag about.

But in The Screwtape Letters,
C.S. Lewis postulates
that we are both animal and spiritual.
Screwtape, the senior devil,
explains to his nephew Wormwood:
‘“Humans are amphibians...half spirit and half animal...
as spirits they belong to the eternal world,
but as animals they inhabit time.

Although this is not a biblical story,
the Church Fathers that Lucifer,
being the chief of the angels,
a purely spiritual being,
could not bear the thought
that human beings were to be superior to him,
and so he and some of his fellow angels
rebelled against God,
seeking to draw human beings into his orbit.
These animals should serve and be in thrall to the spiritual.

But the Word came into the world
to redeem us from sin, death, and the devil,
so that human beings should be what they are,
one of the animals,
but with the unique privilege and responsibility
of bearing God’s image,
of being carnal creatures
with the ability to recognize and praise and serve God,
to converse with him and walk with him.

So this is a pretty heady sermon for Christmas morning.
Perhaps we are not awake enough for this.
Blame it on being carnal creatures
who need sleep.
But the God who slumbers not nor sleeps
slept in a manger,
after the Virgin gave birth to him.
The God who created the worlds
became a creature.
The God who inhabits eternity stepped into time.
And so we worship,
not an angel,
but a God,
who became truly one of us,
in order that we might share in his Spirit.
Think about it when you’re more awake.