We are journeying through a wilderness – not a literal wilderness, but a metaphorical one. It is a place where we can’t survive spiritually unless we depend on God.'

'The promises of God are not that we will never suffer, never be confused. We will not necessarily have fulfillment according to the world’s standards, and we may never achieve our dream job, our dream relationship, or our dream life. Rather, we are called to believe that we are sinners that are forgiven, we are subject to evil from which we will be delivered, and that we will die, but will be made alive.' 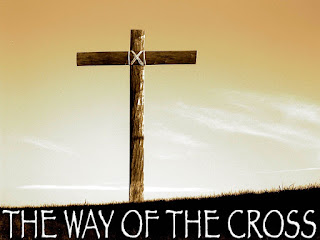 We will be going 'The Way of the Cross' during our Lenten evening prayer services. We will not do all the stations each week, however - we will be dividing them among the first five Wednesdays in Lent. This week, we will meditate upon stations four through six.
The liturgy is adapted by The Rev. Thomas Weitzel, Florida, whose liturgy page may be found here.

Far be it for me to glory except in the cross of our Lord Jesus Christ (Galatians 6:14).

The Gospel lesson today is a war story. It tells of Jesus’ first battle with the evil one. The Son of God goes forth to be tempted, not by God, for God tempts no one, but by the evil one, who successfully tempted humanity.

The evil one’s goal is to separate the Son of God from his Father. If he does this, then he will be undisputed lord of humanity – for if this human being does not fear, love and trust God above all things, then no human being can.

The evil one comes armed with three weapons that have never failed him. He comes bearing gifts that have subdued human beings for all time – hunger, power, and status.

All of us are tempted in some form in all three of these areas. We all run into the situation where our felt physical needs come into conflict with God’s commands and the needs of others. If we take our needs without regard to God’s commands and the needs of others, then we have ‘commanded stones to become bread.’ In other words, we have been more concerned with providing for our own wants and desires than being willing to receive them from God.

Not all of us have the opportunity to seize earthly power. But all of us are tempted to use physical or psychological power over others in order to control them and the world around us. Power can become an aphrodisiac. We see many people in the world who worship power, and when they worship power, they are truly dealing with the devil.

Whenever we have power in big or small ways, we must remember that it can quickly become a master. If we think of the book and movie Lord of the Rings, we remember that the Ring of Power could not be used for good. Anyone who took control of the Ring, even if they wished to do good with it, would quickly become just as much of a tyrant as Sauron the maker of the Ring. The more powerful they had been before taking the Ring, the more dangerous they would be with it.

Finally, the evil one uses the weapon of status. He claims that God’s special one will be able to use his special relationship to God to be invulnerable. Perhaps we see this in spiritual leaders that use their status in the church to cloak misdeeds, and presume that their station excuses these deeds. But anyone who claims exemption from striving to keep God’s word on the principle that God is loving and forgiving also is dependent upon status. This is what Dietrich Bonhoeffer called ‘cheap grace.’

The evil one attacks Jesus with the three weapons that have never failed him. But Jesus does not come into the fight unarmed. He has the ‘sword of the Spirit,’ the Word of God. Whenever the evil one tempts him, Jesus parries with the Word of Scripture. It is with this weapon that he routs the evil one from the field. But the devil is not vanquished, but departs ‘until an opportune time.’ The devil saves his most powerful weapon for last, the one in which he has the most confidence – the weapon of death. It is this assault that Jesus must face in Jerusalem. 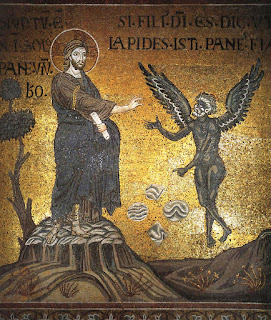 It is for this reason that many Christians have emphasized memorizing Scripture – not for brownie points nor because there’s a test before you can enter the Pearly Gates – but because we need to be armed with the weapons of the Spirit. The only weapon we have against the evil one is the Word.
Those who would share in the king’s victory must go with him into combat. And whether or not we know it, we are under assault.

We need not make the devil a figure in a red suit with horns and a barbed tail. All we need to do is remember how hunger, power and status entice people to forget God’s commands and violate the integrity of others.

Perhaps a good place to start might be with the words Jesus uses to repel the assaults of the devil in this passage:

So we go into combat. But we don’t go alone. Alone we would never be able to resist the evil one. ‘On earth is not his equal.’ As long as we are on the field of combat with our Lord, however, we can put our trust in Jesus that he will be our victor and our Savior. When the devil holds sin and death before us, we cling to Jesus’ forgiveness and resurrection.

No strength of ours can match his might!
We would be lost, rejected.
But now a champion comes to fight,
whom God himself elected.
You ask who this may be?
The Lord of hosts is he!
Christ Jesus, mighty Lord;
God’s only Son, adored.
He holds the field victorious!

Email ThisBlogThis!Share to TwitterShare to FacebookShare to Pinterest
Labels: A Mighty Fortress, Devil, Evil One, First Sunday of Lent, Lent, Scripture, Sword of the Spirit, Temptation, Temptation of Jesus, Wilderness 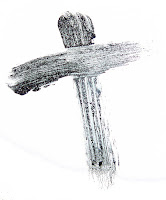 We have received the sign of ashes on our foreheads, reminding us of our own mortality; that we are dust, and to dust we shall return.

But it is more than simply the fact that we shall die someday that we remember on this day.

We also confess by the receiving of dust on our foreheads the futility of life without God, how life without God is so much dust and ashes.
Click Here to read the whole post » 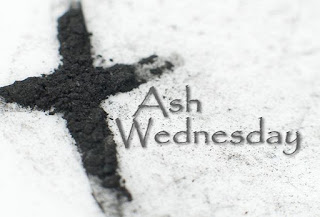 Both services will include the imposition of ashes and the Sacrament of the Altar.

The 7:30 pm service will be accompanied with choral and organ music.

Visitors are most welcome.