Sermon Wednesday in 2 Lent - The Way of Discipleship (Baptism)

Romans 6:3-11
Based on Chapter Nine of Discipleship by Bonhoeffer

Have you ever wondered when the apostles were baptized?
After all, it is not recorded that Jesus baptized Peter, James and John,
or Levi when he was called from the tax booth.
This seems to contradict the doctrine of the church that baptism is necessary.
If it wasn’t necessary for the apostles,
why is it absolutely necessary for us?

But Eberhard Bethge, a student of Bonhoeffer’s who became his best friend,
wrote in his study notes on the call of Levi,
“By being called, Levi has become a ‘baptized disciple.’

The encounter with Jesus is what happens in Levi’s call and in our baptism.
The same Jesus who met Levi at the tax booth
is risen and meets us in Word and Sacrament.
If in his call, the incarnate Jesus ‘baptizes’ Levi,
then in his church’s baptism he calls us.

Baptism is not something we offer to God;
it is something that God offers to us.
Just as none of the disciples could ‘choose’ to become a disciple,
but were called to follow,
so none of us choose baptism,
but are chosen.
Those who are infants are chosen, those who are adults are also chosen,
for it is never a matter of us nominating ourselves,
no matter our age.

[This is why it is problematic for peo[ple to say
that we need to make a ‘decision’ for Christ.
In Baptism Christ decides for us,
he is always the subject of the active verb.

It is also problematic for well-meaning parents to say
that they won’t raise their children in the church
because they want them to ‘decide’ when they’re older.
No one, whether child or adult, can follow Jesus
without the call of Christ,
and children are called just as they are;
there is no age of reason for disciples.
Indeed, children may well be more faithful than parents.

Finally, it is problematic when we teach
that when infants are baptized, it is the parents’ decision,
and that when teenagers are confirmed, it is their decision.
We want to give children a sense of responsibility –
but actually we let both children and their parents off the hook.
We are not glorifying Jesus,
but the decision-making independent self.
Whereas if we had taught rightly,
we would have taught that in baptism,
Christ has called us by his own name,
and we are never independent from him;
our God-given freedom is to be used for him.]

Just as Levi was called from the tax booth,
our baptism into Christ calls us out from the world.
Baptism implies a break between the old life and the new.
It is not a chronological break,
as if before baptism we were one self
and after baptism we are another.
This helps us to understand why an infant is baptized for sin not yet committed,
and why an adult must still struggle with sin even when the new life has begun.

The old life is the life of self-interest that clings to us throughout our lives,
and the new life is the life in Christ which we are given by grace,
in which we may love God and neighbor.
In the old life we relate to other human beings, money, time, talent,
nation and community on our own,
but in the new life Christ always is involved in the relationship.
It is never just my life, but my life in Christ.
The old life and the new life are always at odds,
but Christ is constantly at work in us to drown the old and to bring forth the new.
Baptism is death for the old self and life for the new.

Just as Jesus’ call required a public act of following in front of everyone,
so in our baptism we are called to follow publicly.
Our faith is personal but never private.
Baptized people become visible in the community of the church.
In the service of baptism, the parents are instructed
to bring the children into the community of the church.
In the service of affirmation of baptism,
the first thing we are asked if we will ‘continue to live among God’s faithful people.’
The life of baptism is neither merely an assent to certain truths
nor is it simply a vague commitment to doing good deeds.
Rather, it is to associate with Jesus,
and that means to be a visible participant in the Church of Jesus Christ.

In some places in the world, that visibility can lead to physical death.
But the break with the world in baptism requires and causes our death,
whether or not we are given the grace of martyrdom.
Bonhoeffer writes, ‘Every call of Christ leads to death.’
It means that in baptism we live under God’s word,
seeking his will and dying to our own,
and we are commanded to bear the cross,
that is, to deal with and bear others.
If they wish to maintain community with Christ,
Christians cannot wall themselves away from others,
whether they are secure in their posh resorts
or living in whatever fantasy they can afford,
but must encounter the other
who makes claims on their time, energy, and resources.
That too is death of the old self.
But this death is a gift of grace,
it is not a punishment.
It is a gift because we are with Jesus,
who is the way, the truth and the life,
and if we are with him now, we are with him for time to come.

If, in Jesus’ call of the disciples, they were baptized,
then in the baptism of the Church, we are called.
This baptism is God’s grace which we receive.
Baptism liberates us from serving the world
or making the world serve us,
and calls us to serve Christ in the world
Baptism requires public identification with
and participation in the Church.
And baptism puts to death the old self-seeking person
and brings to life the one who seeks God alone.

‘Having taken their life from them,
[Jesus] now sought to give them a life that was full and complete.
And so he gave them his cross.
That was the gift of baptism to the first disciples.’
And, may I add, his gift to us as well. Put some peace and quiet in your Wednesday night.
Lenten Evening Prayer begins at 7:00 p.m.The sermon series in Lent is 'The Way of Discipleship.'

Sermon Wednesday in 1st Lent - The Way of Discipleship

Now after John was arrested, Jesus came to Galilee, proclaiming the good news of God, and saying, ‘The time is fulfilled, and the kingdom of God has come near; repent, and believe in the good news.’
As Jesus passed along the Sea of Galilee, he saw Simon and his brother Andrew casting a net into the lake—for they were fishermen. And Jesus said to them, ‘Follow me and I will make you fish for people.’ And immediately they left their nets and followed him. As he went a little farther, he saw James son of Zebedee and his brother John, who were in their boat mending the nets. Immediately he called them; and they left their father Zebedee in the boat with the hired men, and followed him.

Sermon based on Discipleship, chapter eight

Dietrich Bonhoeffer puts it starkly –
‘To his first disciples Jesus was bodily present,
speaking his word directly to them.
But this Jesus died and is risen.
How, then, does his call to discipleship reach us today?
He no longer walks past me in bodily form and calls, ‘Follow me.’
And this leads us to seemingly unending questions.’

I can imagine that some questions might be,
Where should I listen for the call of Jesus?
Should I listen for a voice inside my heart?
Or open the Bible to a random page and do what it says?
How can I tell which call is for me?
Can I say that I should leave everything and go like the first disciples?
What about those who were not called to leave everything and follow?
What should I do?
Where can I hear Christ, where can I encounter him?
Bonhoeffer says,
‘What for the first disciples was so entirely unambiguous
is for me a decision that is highly problematic and fraught with uncertainty.’

But, he says, we need to remember and take seriously
that ‘Jesus Christ is not dead but alive and still speaking to us through the word of Scripture.’
‘If we want to hear his call to discipleship,
we need to hear it where Christ himself is present.
‘The preaching and sacrament of the church is where Jesus Christ is present.
Listen to the Gospel of the crucified and risen Lord!
Here he is, the whole Christ,
the very same who encountered the disciples.
Indeed, here he is already present
as the glorified, the victorious, the living Christ.’
‘Christ can only be recognized in faith.
That was true in the same way for the first disciples as it is for us.
They saw the rabbi and the miracle worker,
and believed in Christ.
We hear the word and believe in Christ.’

But perhaps we think, still the first disciples have an advantage over us,
because they were told exactly what to do.
They heard it from his lips,
they did not have choices laid before them.
And perhaps this is why the church has such trouble with obeying Christ,
with discipleship.
If only Christ himself would clearly speak to us,
and tell us what to do, or how much to give, or what to feel and think,
or maybe even for whom to vote,
we would be glad to do it!
or at least we would know that like the rich man, we cannot follow.
But we are seemingly left on our own;
without a clear command from the Lord.

Again, Bonhoeffer bids us put our faithless questions aside.
Jesus’ clear command to each of us always has the same purpose;
‘it demands faith from an undivided heart,
and love of God and neighbor with all our heart and soul.’

This indeed is unambiguous!
Faith and love!
‘He has told you, O man, what is good,
and what does the Lord require of you
but to do justice, and to love mercy,
and to walk humbly with your God?’

So it is not a matter of taking on the same identity
as the disciples or other people in the New Testament:
to wonder whether we really should have been wandering evangelists
or to stay at home like the man cleansed of demons
and tell all one’s neighbors of God’s goodness.
Indeed, should we choose a particular course of action,
to leave behind everything
or to give away all our possessions
or to stay and have them,
without faith in Christ and love of God and neighbor.
it would be nothing.
‘If I speak in the tongues of men and angels,
but have not love…’

And so, concludes Brother Dietrich,
‘when we ask the question
of where we can hear Jesus’ call to discipleship today,
there is no other answer than this:
listen to the word that is preached,
and receive the Sacrament.
In both of these listen to Christ himself.
Then you will hear his call!’

Put some peace and quiet in your Wednesday night.

The sermon series in Lent is 'The Way of Discipleship.'

Our Ash Wednesday services are today, 12:30 p.m. and 7:30 p.m., with the Holy Communion and Imposition of Ashes at both services. 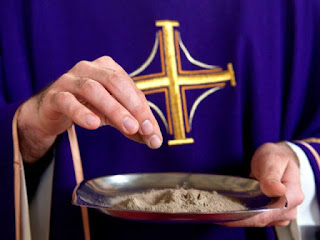