'In baptism, God has called us into Christ’s fellowship. He has brought us into relationship with his Son. He has made us part of his family, and intends us to be ‘holy,’ that is, set apart for his purposes.'

Sermon – The Second Sunday after the Epiphany

How many of you noticed just how many times the verb ‘call’ was used in our lessons for today? By my count, it was six times. So even if you didn’t read the blurb in the front of the bulletin yet, you might have noticed a theme in the texts for today, the theme of ‘call.’

In the first lesson from Isaiah, the servant of God is ‘called before he is born,’ and named while he was still in his mother’s womb. God has a purpose for the servant’s life. This call from the future determines the present. The servant is intended from the beginning to be a witness to God’s loving purpose in the world, to restore God’s people to him and to call people from other nations to God’s light. (See, there’s that word again, ‘call.’ You can’t get away from it.)

In the reading from Paul’s first letter to the Corinthians, the word ‘call’ is used four times. Paul is ‘called to be an apostle,’ this is God’s intention for him, to be sent out as a messenger of Christ to people. The Corinthians are ‘called to be saints,’ and ‘called into the fellowship of God’s Son.’ God purposes that they be holy people, one with all who ‘call upon the name of the Lord.’

Finally, in the Gospel lesson we have an episode from the very beginning of Jesus’ ministry. We have one explicit use of the word ‘call,’ when Jesus gives Simon a new name and calls him ‘Peter,’ that is, ‘the Rock.’ But we have two other instances where the concept of ‘call’ is implied. 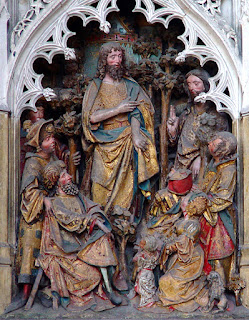 The second time we might see the concept of ‘call’ being used is when Andrew, Simon Peter’s brother, finds him and tells him about Jesus. Andrew ‘calls’ his brother, if you will, calls him into the fellowship of Jesus, just as later Paul would be God’s instrument in calling the Corinthians into fellowship with Jesus. When Simon comes to Jesus, he is given his new name, the name by which we call him: Peter, the fickle, fallible one who is yet forgiven and given faith by Jesus to be the spokesperson for the twelve apostles.

You have not yet heard a sermon, but a lecture on the many ways the word ‘call’ can be used in the Bible. What makes it a sermon is if the good news of Jesus is proclaimed, not in an abstract sense, but to you and me in the present day. The good news is that through his Church, Christ calls people like you and me into fellowship with him, and gives them purpose, both general and specific.

In baptism, God has called us into Christ’s fellowship. He has brought us into relationship with his Son. He has made us part of hiss family, and intends us to be ‘holy,’ that is, set apart for his purposes. The word ‘holy’ may be too strange a word for us – set apart for God’s purposes might be something that we can get our heads around.

But what is God’s purpose? We might think of a specific purpose for our lives – something that we are cut out for, if you will, some way in which God uses our unique gifts and abilities to minister to others. This is the word ‘vocation’ which is talked about in church circles. The word ‘vocation’ comes from the Latin word vocare, ‘to call.’ We often use it formally and informally when we talk about pastors. A person gets an informal sense of ‘call’ and follows that prompting to seek ordained ministry. Then a congregation issues a ‘call’ to an ordained person to serve as its pastor.

Certainly the Church needs ministers, and I’d say that even if I weren’t one and even if my wife didn’t work for the seminary. But as we know, there is more than one vocation in the church and in the world. The author Frederick Buechner may have said it best when he said this about vocation: ‘The kind of work God usually calls you to is the kind of work that a. you need most to do and b. that the world most needs to have done…(t)he place God calls you to is the place where your deep gladness and the world’s deep hunger meet.’ This is a beautiful description of vocation, and one I’m very glad to share with you, again, for I know I’ve said it more than once. In fact, I’m pretty sure I’ve preached this exact kind of sermon on ‘call’ more than once.

But truth be told, this definition of ‘vocation’ is not wholly satisfying, for a few reasons. The first is that often times our work doesn’t necessarily hold great satisfaction. Other times we may not be able to find in our work an intrinsic sense of importance. We may not even ‘go to work’ anymore, or if we do, it’s not particularly tailored to our uniqueness. And too often we see our ‘work,’ whatever it is, as the main arena of our life, and when we are not working, whether it’s the weekend or retirement, we may think of that time simply as time for the self. There’s a lot to unpack here, none of which we have time for.

The point is that ‘vocation’ is more than just our daily work.

Our ‘call’ or ‘vocation’ is to be set apart for God’s purposes in revealing Jesus Christ to the world. And that looks like what John the Baptist and Andrew is doing in the Gospel lesson. John the Baptist confesses Jesus as ‘the Lamb of God who takes away the sin of the world,’ and points his followers to Jesus. Confessing Jesus in public is part of our baptismal vocation, what we’re called to do, who we’re called to be.

This may seem daunting, but after all, you’re doing it now. If you’re here, you’re confessing Jesus as Lord, of your person, your time, your talents, your gifts. And if someone knows that you’re here doing that, you’re confessing Jesus. If you’ve invited someone to come with you while you do that, saying, ‘Come and see,’ or offering prayer for a person who is in need of it, you are answering God’s call to be set apart for his purposes. We do not need to make things harder than they are.

So in our baptism we are called to God’s purpose, to confess the Lamb of God who takes away the sin of the world, in small and big ways to make him known who comes to us in word and water, wine and bread, who shares with us all things, the good and bad, and who loves us with a love that passes understanding. Amen