The First Sunday in Lent

On February 12, 1974, the day on which he was arrested by the Soviet government, the Russian novelist Alexander Solzhenitysn released a text urging his countrymen to adopt this attitude towards life. He knew that public protest was impossible in the USSR, and that armed revolution of the same kind that had created the Soviet state was to try to accomplish noble ends by despicable means. 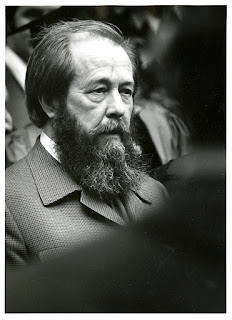 What then was the way forward for himself and those like him? Was it to ‘wait inertly’ hoping that something would happen by itself? But Solzhenitsyn, very much like Frederick Douglass, believed that nothing happens by itself, that power yields nothing without a demand. But, rejecting violence, he recommended another way – a non-participation in the lie which propped up the tyranny of violence.

‘When violence bursts onto the peaceful human condition, its face is flush with self-assurance, it displays on its banner and proclaims: “I am Violence! Make way, step aside, I will crush you!” But violence ages swiftly, a few years pass—and it is no longer sure of itself. To prop itself up, to appear decent, it will without fail call forth its ally—Lies. For violence has nothing to cover itself with but lies, and lies can only persist through violence. And it is not every day and not on every shoulder that violence brings down its heavy hand: It demands of us only a submission to lies, a daily participation in deceit—and this suffices as our fealty.’

The lie sanctions the violence: it is what cloaks violence with its necessity, inevitability, with decency, with respectability. And I’m quite sure that Solzhenitsyn would approve of us going beyond the lies of the Soviet Communist Party to which he referred. Lies sanctioned the enslavement of Africans two hundred years ago, saying that they were fit for nothing but servitude. Lies sanctioned the mass murder of the Jews eighty years ago, saying they had caused all the misfortunes that had befallen the German people. And today? Putin’s lie, perhaps his lie to himself? that God wills a greater Russia sanctions the bombing of the cities of Ukraine, the indiscriminate attacks which kill children, the preparation of liquidation lists, the rattling of the nuclear saber, the crushing of dissent and the control of information. The legitimate government of Ukraine is illegitimate, a puppet government of America, they are neo-Nazis, fascists, an existential threat to Russia – the invasion is a ‘special operation,’ the occupiers are ‘liberators.’ And so is the violence sanctioned, sanctified - the lies dress up the war as necessary, inevitable, decent, respectable.

What did Solzhenitsyn recommend to his countrymen, the day of his arrest and the day before he was exiled from his country?

And therein we find, neglected by us, the simplest, the most accessible key to our liberation: a personal nonparticipation in lies! Even if all is covered by lies, even if all is under their rule, let us resist in the smallest way: Let their rule hold not through me!

Now this may seem to be a small thing. But for Solzhenitsyn it was the first thing, and personal liberation from the rule of the lie which baptizes violence was the necessary condition for any change in the world. If they could not resist in any other way, he and his comrades could simply refuse to add their voice in support of anything they believed to be a lie. If enough people did that, he believed, something might happen.

Our way must be: Never knowingly support lies! Having understood where the lies begin (and many see this line differently)—step back from that gangrenous edge! Let us not glue back the flaking scales of the Ideology, not gather back its crumbling bones, nor patch together its decomposing garb, and we will be amazed how swiftly and helplessly the lies will fall away, and that which is destined to be naked will be exposed as such to the world.

I think that this is a key point: Solzhenitsyn admits that we may not know something is a lie. If you do a little digging, you will find that he, like Vladimir Putin, was firmly against the independence of Ukraine. Does this mean that he would be supportive of Putin’s war? I don’t think so, but I can’t be sure. I think, I hope, that the violence Putin is using, would, for him, unveil the lie which even he had believed.

In The Gulag Archipelago, Solzhenitsyn wrote:

‘If only it were all so simple! If only there were evil people somewhere insidiously committing evil deeds, and it were necessary only to separate them from the rest of us and destroy them. But the line dividing good and evil runs through the heart of every human being... During the life of any heart, this line keeps changing place; sometimes it is squeezed one way by exuberant evil and sometimes it shifts to allow enough space for good to flourish. One and the same human being is, at various ages, under various circumstances, a totally different human being… But his name doesn’t change, and to that name we ascribe the whole lot, good and evil…Confronted by the pit into which we are about to toss those who have done us harm, we halt, stricken dumb: it is after all only because of the way things worked out that they were the executioners and we weren’t.’[2]

And this, finally, leads us to our Gospel reading for today, and the reason that though the line between good and evil runs through our hearts, that we may have hope. For Jesus refuses to live by the lies of the evil one. We may use ‘live not by lies’ in a figurative sense, but in a very literal sense Jesus refuses to live by lies in that he will not take food rather than receive it from his Father’s hand; he will not take the kingdom by violence rather than accept it through suffering; he will not use his status as God’s Son as license, idolizing the Father’s promised protection. But he trusts God even in a world of lies and violence, and will not adopt those ways. By his non-participation in the tempter’s lies, he exposes them and strips them of power.

The devil is counting on the fact that ‘the line between good and evil runs through the human heart.’ He believes he can push Jesus to the other side of the line. But Jesus is the only one whose heart is pure, because his heart is one with the Father’s and he gives no quarter to the father of lies. Solzhenitsyn was at least humble enough, and we must be humble enough, to recognize in ourselves the tendency to believe the falsehoods, to comfort ourselves with the lie so that violence may remain invisible to us. But we are saved from sin, death, and the devil by faith in the one who refuses to comfort himself, but instead endured temptation, so that he might deliver all those who trust in him.

And in God’s good time, he will expose every lie, the violence will cease and all eyes will be opened to see God’s mercy and God’s justice. Would that all would be merciful, so that all would receive mercy! Nevertheless, God’s people will eat their bread in peace and no one shall make them afraid. Do not believe the lies of the devil, that the ends justify the means and that there is no truth but power. Believe instead that though we suffer violence, the angels still guard us, to keep us, that our faith may not be dashed against the rocks. Be strong and courageous.

And live not by lies!