'Friendship is something we know from our experience. It is something which occurs between human beings, it assumes some sort of equality which these other images don’t. To be called friends of the Lord, then, may seem strange to us. It obliterates the distance between us and Jesus, and frankly this might make us a little uncomfortable.'

There are many more images in Scripture for our relationship with Christ. Perhaps on Mother’s Day we might at least mention the passage in Luke where Jesus expresses his desire to gather the people of Jerusalem under his wings as a mother hen with her chicks. Though that desire was not fulfilled, we might presume that Jesus does the same for his Church. 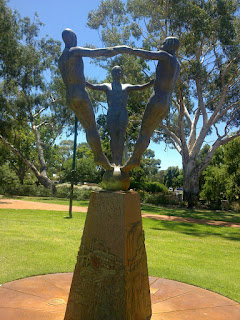 But today, almost in passing, we hear our Lord confer an extraordinary dignity upon human beings. Jesus says to his disciples, ‘I no longer call you servants, for a servant does not know what the master is doing, but I have called you friends, for I have made everything known to you I have heard from my Father.’

This might seem too much. We might picture ourselves sheep, in need of feeding and watering, protection and guidance. We could even imagine ourselves as branches on a vine, clinging to Christ for life and needing his strength to produce good fruit in our lives.

But friendship is something we know from our experience. It is something which occurs between human beings, it assumes some sort of equality which these other images don’t. To be called friends of the Lord, then, may seem strange to us. It obliterates the distance between us and Jesus, and frankly this might make us a little uncomfortable.

We need to explore this, because there are many different understandings of friendship in the world, and various degrees of friendship. Many of us have Facebook accounts, and we know that we get many friend requests from people who aren’t really our friends, who may not know us. At most they may be our acquaintances. I have my own personal rules about which friend requests I accept. But I think that we can agree that this friendship with Jesus is not the superficial friendship we’re talking about.

Other people think of friendship with Jesus as the idea that he is ‘approachable.’ We don’t have to treat him as if he is someone high and mighty, bowing and scraping to him. He’s someone we can relate to, with whom we can be real. If he were to show up at our house we could offer him a beer and he’d watch the game with us. He’d go out with us to those places where you drink wine and paint a picture. We could tell him a joke, even a somewhat irreverent or off-color one, and he’d laugh.

And maybe he’s the kind of friend, we might think, whom we could call when we were in trouble, as if we had been arrested and thrown in jail and had the proverbial one phone call. He wouldn’t judge us, he’d come and bail us out, and he’d be a character witness – he knows who we really are or who we’d like to be.

While Jesus certainly does love sinners, to the point of eating and drinking with them in his earthly life, it’s not this kind of friendship he means, either. But if he shows up at your house for a meal, I want to be the first to know.

The friendship to which our Lord calls us is a deep friendship, an intimate friendship. It is not just the kind where we share our secrets with him, though this does happen. But what is more amazing is that he shares his secrets with us. He brings us into his inner circle. He trusts us with his plans; and entrusts us with carrying them out. 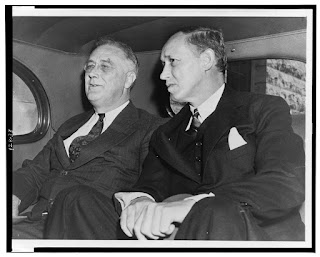 In early 1941, President Franklin D. Roosevelt wanted to support Great Britain against the Nazis. But before he invested his political capital, he needed to know whether Britain had the strength, but more importantly, the will, to keep up the fight. He needed to send someone to gauge Winston Churchill and the British. And he couldn’t just send anyone, but someone he could trust so implicitly that he could open his whole mind to him and then have confidence that he would make the right decision. So he sent his long-time close friend, Harry Hopkins, over the Atlantic as an emissary, to take the measure of the Prime Minister and the British nation and their state of mind. If he found them wanting, he was to return to America without indicating support. But if, in his judgment, the British were still ready and able to fight, he was to promise Churchill, speaking on Roosevelt’s authority, that short of war which only Congress could declare, Roosevelt’s administration would support Britain in every way possible to defeat Hitler. Which is what, of course, happened.

This is the kind of friendship into which Jesus calls us. He reveals to us his whole will and then trusts us do our parts, using our best judgment on how to do it. Jesus chooses us as friends and entrusts us with his name and message.

The Scriptures communicate the story of God, from his creation of the world to his choosing of ancient Israel to his sending of the Son to save all nations from evil, sin, and death. If we don’t know the Scriptures well enough – and who does? we might start to know them better. But in our liturgy, creeds and the Great Thanksgiving we recite the mighty acts of God in confession and praise.

And so we know what God has done in Jesus Christ, and we know what he is doing through the Holy Spirit of Jesus: forgiving sins, delivering from evil, raising from the dead.

The second thing never need to say is that we don’t know what God wants us to do. We know that God reveals in Scripture, in Old Testament, New Testament, in the words of our Lord Jesus what he desires for us. He empowers us to use our best judgment in our specific actions, based on the guidance our Lord has given us. We can know what God desires of us because we can know the mind of our friend, confident that he chooses us and empowers us to act in his name.

It is said that John the Evangelist that in his last days he would simply repeat to those around him, ‘Love one another.’ It was the words of his friend he was remembering, and he was doing his will by passing them on to those whom his Lord also called friends. As those who in baptism have been made friends of the Lord, let us continue to learn his mind and to be his emissaries: for he lives and reigns with the Father and the Holy Spirit, one God, now and forever.