'  The way out of this is not to convince ourselves that the world or God really is fair, and that somehow by some calculus people really do get what they deserve. Nor is it to think that everyone who has success has had success at the expense of others. The way out of this is to understand God not as fair, nor as unfair, but as generous. To see him as giving life and salvation not based on our calculation but on his goodness.'

[Jesus said to the disciples:] 1“The kingdom of heaven is like a landowner who went out early in the morning to hire laborers for his vineyard. 2After agreeing with the laborers for the usual daily wage, he sent them into his vineyard. 3When he went out about nine o’clock, he saw others standing idle in the marketplace; 4and he said to them, ‘You also go into the vineyard, and I will pay you whatever is right.’ So they went. 5When he went out again about noon and about three o’clock, he did the same. 6And about five o’clock he went out and found others standing around; and he said to them, ‘Why are you standing here idle all day?’ 7They said to him, ‘Because no one has hired us.’ He said to them, ‘You also go into the vineyard.’ 8When evening came, the owner of the vineyard said to his manager, ‘Call the laborers and give them their pay, beginning with the last and then going to the first.’ 9When those hired about five o’clock came, each of them received the usual daily wage. 10Now when the first came, they thought they would receive more; but each of them also received the usual daily wage. 11And when they received it, they grumbled against the landowner, 12saying, ‘These last worked only one hour, and you have made them equal to us who have borne the burden of the day and the scorching heat.’ 13But he replied to one of them, ‘Friend, I am doing you no wrong; did you not agree with me for the usual daily wage? 14Take what belongs to you and go; I choose to give to this last the same as I give to you. 15Am I not allowed to do what I choose with what belongs to me? Or are you envious because I am generous?’ 16So the last will be first, and the first will be last.”

‘All I want is what’s coming to me. All I want is my fair share!’ So says Charlie Brown’s younger sister Sally in A Charlie Brown Christmas. She has learned how to count – and learned the lesson of counting, that since she has been extra good, she can expect an extra big slice of the pie. 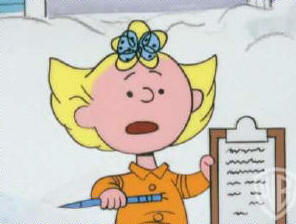 I wonder if Sally was happy on Christmas morning. She probably was. But maybe she wasn’t as happy after New Year’s. After New Year’s you go back to school and you see and hear what your friends got for Christmas. A Charlie Brown Christmas doesn’t show us whether Sally came home happy for what her friends got, or angry because she didn’t get as much or the same things. Did she feel that she got her fair share? We don’t know.

Jesus invites us to a different way of looking at the world. Those who are constantly counting, looking for their fair share, are called instead to understand God as a God of generosity, who gives not according to human standards, but out of the storehouse of his goodness.

Now it might not go without saying that in one sense, we should be concerned about fairness. We ought to be concerned that children share their toys, that our government is fair, that business is fair, that people treat each other honestly without respect to their race, gender, the amount of money they have, and so on. In this sense, in the civic affairs of the world, we must think in terms of fairness, or at least that people are given opportunity.

But as soon as we start thinking outside of these areas, we need to lay our idea of fairness aside. For if we are fixated on whether what we’ve been given is fair, we cannot receive it. We cannot be grateful for it. We cannot be contented. And we end up eyeing others with suspicion and resentment. Why is that house so big and that vacation so lavish? Why is their marriage thriving, their children healthy? What did they do to deserve all that happiness?

Other people profit from our discontent. People buy expensive things on credit because we are told that they ‘deserve’ them, and end up paying for the rest of their lives. We vote for candidates who promise us a bigger slice of the pie, who tell us that if we vote for them we will finally get what’s coming to us, our fair share.

For the secular person, envy of others might lead to the belief that the system is unjust and that anyone with the good things in life has stolen them from others. But for the religious person, envy and jealousy of others is also - disappointment with God. God could have chosen to give what that person has to me, and yet he did not. He has given more than the fair share to that person, and an unfair share to me. I might be able to understand the idea that I have sinned and therefore I deserve less. But for those who try to obey God, for those who confess their sins and pray and work, their jealousy becomes disappointment with and perhaps anger at God.

Strangely enough, there may be another related but different problem for the religious. We may be tormented by the idea that we have been given more than our fair share. We may look at all the inequality in the world, the terrible situations of others, and wonder ‘why am I blessed with health and material comfort? What have I done to deserve this?’ We may be waiting for others to criticize us and eventually God to judge us not only for not giving, but simply for having when other people do not.

Finally, the idea that people can simply ask for forgiveness and be received into the kingdom of heaven might fill us, not with rage, perhaps, but with a sense of unfairness. It may not be understandable to those who have heard the call to obey and to work that others who have lived their lives for themselves and have had a spiritual awakening get off scot-free, as it were.

‘All I want is what’s coming to me! All I want is my fair share!’ Out of the mouth of cute little Sally Brown, the words are innocuous. But the words of the fieldworkers who grumble against the landowner are threatening and violent.

The way out of this is not to convince ourselves that the world or God really is fair, and that somehow by some calculus people really do get what they deserve. Nor is it to think that everyone who has success has had success at the expense of others. The way out of this is to understand God not as fair, nor as unfair, but as generous. To see him as giving life and salvation not based on our calculation but on his goodness.

Our life and property, our family and community, is not given to us as a just reward but as sheer gift. Joy and sorrow, pleasure and pain, labor and ease, are not allotted as reward for services rendered, but are simply provided to us out of God’s provision.

Martin Luther explains this well in the Catechism. ‘I believe that God created me together with all creatures. God has given me and still preserves my body and soul; eyes, ears, and all limbs and senses; reason and all mental faculties. God also daily and abundantly provides shoes and clothing, food and drink, house and farm, spouse and children, fields, livestock, and all property, along with all the needs for this body and life. God protects me against all danger and shields and preserves me from all evil. All this God does out of his pure, fatherly, and divine goodness and mercy, without any worthiness or merit of mine at all. I therefore owe it to God to thank and praise, serve and obey him. This is most certainly true.’

Note the second-to-last sentence: ‘We owe it to God.’ God does not owe us, we owe God! We are in debt to him, not he to us. Fair and unfair are not words we can associate with God, but we understand him as being generous and giving. And we joyfully receive what he gives us, with open hands, not glancing at other people’s hands to make sure that we’ve been given our fair share, but focusing on what he has given us, on the beginning he has made for us.

For the word ‘generous’ comes from the same word from which we get genesis, generation, genius, and other words having to do with beginnings. In giving to us, God has done something – something new! He has set us in the vineyard, given us the honor of being his servants, to ‘thank and praise, serve and obey him.’ And because his generosity is a beginning, it has a continuation, as we proclaim the Gospel to others, as we give to others, as we forgive others, as we love and serve others. Strangely enough it is often those who would seem to have been given the short end of the stick in life who understand this – that God is not fair, neither is he unfair – but God is good.

If we insist on God being fair or unfair, life is static and unchanging and will ultimately disappoint us, as we grumble against God for not making everyone equal and us most equal of all. But if we understand God as good, generous, making a beginning, then life is dynamic and unexpected and full of joy. The first who expected fairness shall be last, but the last ones who were owed nothing but received only goodness shall be first.