Though he is alive, we no longer have the body of Jesus with us.
The church confesses that he bodily ascended into heaven
and ‘is seated at the right hand of the Father,’
which means that he has been given all the authority of God.

We also confess that he will come again from heaven
to judge the living and the dead;
his authority, which now we acknowledge by faith,
will be seen by all.
Those who have rejected the rule of God,
who have done evil and loved falsehood,
will continue in that rejection,
and those who have sought God
will find his mercy in the glorious and gentle rule of Christ.


To understand this,
we must understand that when Jesus ascended,
he did not withdraw his presence, but transformed it.
He ascended into heaven ‘that he might fill all things.’
He did not leave his disciples alone
but made it so that they might be in his bodily presence continually
and that his presence might be available in every time and place.

Indeed, the body of Christ should not be seen as an ethereal reality,
or as mere metaphor explaining the different gifts of Christians.
Rather, Bonhoeffer insists that the community of the baptized
‘becomes a body which is none other than Christ’s own body.’
‘Since the ascension, Jesus Christ’s place on earth has been taken by his body, the church.
The church is the present Christ himself.’

Every week when we confess the Creed,
we say that we believe in the holy Catholic Church.
We are confessing that Christ left for himself a body on earth
into which he incorporates us physically.
That body does what he did,
or, better, he does what he does now through his body now,
proclaims the coming of the kingdom of God
and forgives sins
and serves others.

It is written ad nauseam by people who ought to know better
that ‘Christ did not come to found a church,’
when in fact that is exactly what he came to do.
Or at least, that’s one of the things he came to do.
He may not have intended every detail of the institution the Church has,
but he did call a people to follow him and to be his body in the world
until he should be revealed to all people.
That body is called the holy Church.
He intended us.

Those who are baptized have one Spirit, the Spirit of Christ.
They have one will, the will of Christ.
The body has one mind, the mind of Christ,
All of this is summed up in Colossians
by the phrase ‘Christ is the head of the body, the Church.
But this does not mean that the Church is some sort of collective hive-mind,
like the Borg from Star Trek.
Rather, our God-given individuality is not used for self,
but in the following of Jesus.
This individuality is not self-centered, but God-centered.

We can see this united individuality reflected in the Holy Scriptures.
Unlike the Koran, which is written in one style only,
and that one which shows no individual voice,
the Christian Scriptures are full of distinct voices,
Isaiah, Jeremiah, Amos, Matthew, John, Paul, Peter, James.
But it is the one God who is proclaimed,
the one Christ exalted.
And we are one because in our individuality
we proclaim one Christ.
When Christ is not proclaimed,
whatever unity people have is not unity in Christ.
When he is proclaimed,
then radically diverse individuals are made one. 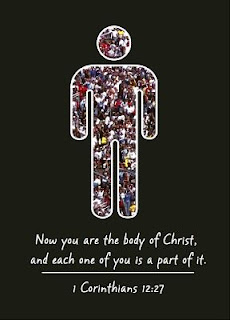 There is more that could be said.
Indeed, Bonhoeffer goes on in chapter ten to discuss the idea of the temple;
the temple of Christ’s body
and the dwelling of God the Holy Spirit in the temple, which is the Church.
But we don’t have time for that.
Indeed, it can be exhausting to hear such a succession of declarative sentences.
I feel that way about John,
and sometimes I feel that way about Bonhoeffer.
But perhaps we understand more about the body of Christ.
In this faith family,
we are not simply individuals coming together because we all have an interest in religion.
As those who are called,
we gather in Christ’s name
to be in Christ’s bodily presence,
indeed we are Christ’s body,
filled with his Spirit to give praise to his Father,
bearing witness to his love and mercy.