Now among those who went up to worship at the festival were some Greeks. They came to Philip, who was from Bethsaida in Galilee, and said to him, “Sir, we wish to see Jesus.” Philip went and told Andrew; then Andrew and Philip went and told Jesus. Jesus answered them, “The hour has come for the Son of Man to be glorified. Very truly, I tell you, unless a grain of wheat falls into the earth and dies, it remains just a single grain; but if it dies, it bears much fruit. Those who love their life lose it, and those who hate their life in this world will keep it for eternal life. Whoever serves me must follow me, and where I am, there will my servant be also. Whoever serves me, the Father will honor.
“Now my soul is troubled. And what should I say—‘Father, save me from this hour’? No, it is for this reason that I have come to this hour. Father, glorify your name.” Then a voice came from heaven, “I have glorified it, and I will glorify it again.” The crowd standing there heard it and said that it was thunder. Others said, “An angel has spoken to him.” Jesus answered, “This voice has come for your sake, not for mine. Now is the judgment of this world; now the ruler of this world will be driven out. And I, when I am lifted up from the earth, will draw all people to myself.” He said this to indicate the kind of death he was to die. - John 12:20-33

I have a book on my shelf –
well, actually I have a lot of books on my shelves.
This book is called What Was the World of Jesus?[1]
and it goes into detail about the hopes and realities
of people 2,000 years ago.

The hopes were that God would act to fulfill his promises,
one of which we have today in our reading from Jeremiah,
that God would make a new covenant with his people,
that he would forgive their sins
and put new desires in their hearts,
so that they would finally fulfill their destiny,
to be a people of God not only in name, but in word and deed.

The realities were less pretty.
There are so many murders and battles
that I eventually had to stop reading.
It was exhausting.
Foreign invasion,
war between co-religionists,
apocalyptic religious groups,
and finally, the failed uprising that led to
the destruction of Jerusalem by the Romans
in the year 70, some 35-40 years after Jesus’ crucifixion.

So many failed Messiahs,
so many promises of God’s intervention that did not come true,
but there was one who promised the truth,
and whose revolution succeeded.

When Jesus said,
‘The hour has come for the Son of Man to be glorified,’
one wondered if Philip and Andrew thought
that it was time for an uprising,
for Jesus to cleanse the religious world
of its false leaders
and to lead the people in an revolution
which would cleanse the land of the foreign invaders.
But of course, Jesus chose a different path to glory,
‘Unless a grain of wheat falls into the earth and dies,
it remains a single grain;
but if it dies, it bears much fruit.’ 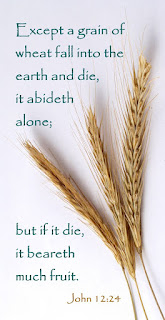 ‘A grain of wheat must fall into earth and be buried;
its external husk has to be broken open for the life within to come out.
Only if it ‘dies’ will it bear much fruit.’

‘So now Jesus sees his own forthcoming death.
It would be so easy to avoid it,
to choose the path of human glory and follow the crowd to revolution.
But if the seed is not placed in the earth, it remains alone.’

‘If one seed reproduces itself fortyfold in the ear of corn which grows from it, and these are all replanted,
and so on each year,
it would only take just over six years
before that one seed results in as many seeds
as there are human beings on this planet –
all from one seed buried in the ground.
Jesus’ path to glory will also put him in the ground
before he can bring his fruit to the Father.’[2]

Very few people know the names
of those failed revolutionaries,
those esoteric, ascetic, or apocalyptic religious groups,
of those who fought each other and those outside
for God’s glory and perhaps their own.
Even for those professional and amateur historians who remember them,
they remain merely objects of curiosity and perhaps of interest.
Perhaps we are more educated if we know about them,
but they have no other effect on our lives.

But Jesus’ name is known throughout the world,
for he is the one to whom the Father gives glory.
He is the one through whom God made the new covenant Jeremiah promised.
And when we know him by faith,
when we trust in what he has done for us,
when we believe that he is the one whom the Father glorifies,
then it is that we are his followers,
we are the fruit which the burying of his seed produces.

And if our lives are to produce fruit,
we must follow in the Savior’s footsteps.
These words apply to us as well as to him:
‘Those who love their life lose it,
and those who hate their life in this world will keep it for eternal life.’

Of course, this does not invite us to self-hatred,
or to a constant state of grimness.
Rather, it invites us to a recognition
that what this world calls glory is not the glory God gives.

The way of power,
the way of conquest,
the ways of anger and desire,
greed, slander and envy,
ways that come so naturally to us
are not to be our ways.
Rather, we are called to die to these ways,
even when they seem to be the only path to glory,
for us to gain acceptance
or to have our say or our will be done
or even to see our accomplishments in our lifetimes.
But we are called to store up our treasures in heaven and not on earth,
to do good to, pray for, and love our enemies and persecutors,
to use our energies and gifts to do God’s will,
to leave behind that which would keep us from God.

‘Every call of Christ leads to death.’[3]
The breaking open of the seed must happen for us as well.
Jesus was born to be buried.
So, we, too, are born to be buried,
not simply physically, but also spiritually.
so that we may be raised.
Our old selves must be put to death
so that our new selves can live,
and so that we can bear fruit.
‘Baptism signifies that our old self
with all its sins and evil lusts
should be drowned by daily sorrow for sin and repentance,
and that the new self should rise up daily to live before God
in righteousness and purity forever.’[4]

St. Teresa of Avila used a different metaphor:
that of the silkworm which builds its cocoon and ‘dies’
so that it may emerge as a butterfly with wings.
She exhorts us:
‘Therefore, courage!
Let’s be quick to do this work
and weave this little cocoon
by taking away our self-love and self-will,
our attachment to any earthly thing,
and by performing deeds of penance,
prayer, mortification, obedience,
and of all the other things you know.
Would to heaven that we would do what we must,
and we are instructed about what we must do.
Let it die; let this silkworm die,
as it does in completing what it was created to do!
And you will see how we see God,
as well as ourselves placed inside God’s grandeur,
as is this little silkworm within its cocoon.’

But death is not the end,
the end is life, a new life,
the life of the free butterfly:
‘It no longer has any esteem for the works it did while a worm,
which was to weave the cocoon little by little; it now has wings.
How can it be happy walking step by step when it can fly?’[5]