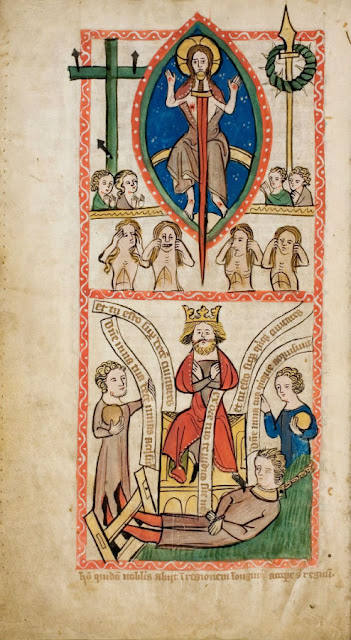 ‘I believe that God has created me together with all that exists.
God has given me and still preserves my body and soul;
eyes, ears, and all limbs and senses;
reason and all mental faculties.
In addition, God daily and abundantly provides
shoes and clothing, food and drink,
house and farm, spouse and children,
fields, livestock, and all property,
along with all that is necessary and needful for this body and life.
God protects me against all danger and defends and preserves me from all evil.
All this God does out of pure, fatherly, and divine goodness and mercy,
without any worthiness or merit of mine at all!
I therefore owe it to God to thank and praise, serve and obey him.
This is most certainly true.’

This part of Luther’s Catechism, explaining the first article of the Creed,
was memorized by children for generations.
It is a triumphant song of thanksgiving and trust in a good God
who provides for his people,
who gives them everything they need,
who acts as a loving father to his beloved children.
If we have this good God,
would we not as a natural response thank and praise, serve and obey him?
Loyalty begets loyalty.
Trustworthiness begets trust,
Faithfulness begets faith.

The first two slaves have these kinds of hearts.
Both the one entrusted with five talents of money
and the one entrusted with two talents
trust that the master knows what he is doing,
and that he desires not only his benefit,
but their benefit; their success.
They are quick to act because they have confidence.

I love words, and the word ‘confident’
combines the Latin prefix ‘con’
which can mean ‘with’ or ‘joining together;’
think ‘confluence’ or ‘conjoin’
with the word ‘fide’ which means ‘faith’ or ‘trust.’
The first two slaves act with confidence in the master,
their faith in him is joined up with his faith in them.

He who was given the one talent to trade with until his master returns
believes that the master does not provide for him,
is jealous of the gifts that the other two have received,
and believe that he has been set up to fail.
And so he does not thank and praise, serve and obey the master.
He does not act for the master’s advantage,
but for his own safety and security.

But why should the third man be confident?
After all, he has not received the five talents, nor the two.
He has received one measly talent.
No wonder he has no faith in the master,
and has to put his faith in his own ability to keep himself safe.

The third slave accuses the master of being unjust.
Is this true?
True, the master does not give him as much money to trade with as he does the others,
but he gives ‘to each according to his ability.’
If the master were unjust,
if he truly were setting him up to fail,
he would have given ten talents to the man who only could have handled one.
So the accusation of injustice falls short of the mark.

I have, in the past, been critical of a popular phrase,
‘God doesn’t give us more than we can handle.’
If a person burdened with grief, depression, or fear
is given this slogan,
it might not be a helpful word.
But when we are faced with the question of who we are,
and called to invest our lives in God’s service,
it can be quite a helpful word.

God knows who we are,
God has created us,
Nothing we do in God’s service is wasted.
He frees us from worry about ourselves,
for he has given us gifts according to our abilities.
We can have confidence in him,
and therefore throw ourselves into the life that is joy;
a life of thanking and praising God,
serving and obeying him.

So what is your concept of God?
Who is the God you believe in?
Is it the one who is a hard master,
who will judge you for every mess-up you make,
and so it’s better not to reach out,
not to do something outside your comfort zone,
not to give away without hope of getting back,
not to risk getting hurt and being tired
and not knowing whether or not you’re doing the right thing?

Isn’t that a joyful vision of God?
When the master says to the faithful, to the confident slaves,
‘Enter into the joy of your master,’
it is because the slaves already were living in his joy.

Let’s not waste time thinking about the times
we have been fearful and self-invested,
because we’ve all been there.
At least I have been.
Often.
But let us joyfully and confidently confess,
‘For all that God has freely given out of pure, divine, and fatherly goodness and mercy,
I owe it to him to thank and praise, serve and obey him.
This is most certainly true.’