(Note: this was the sermon that was written. The actual sermon was truncated due to the fact that my voice was completely shot. I tried to keep the good part.)


In 1817, the three-hundredth anniversary of the Reformation
was celebrated as Europe was in the midst of the Age of Enlightenment,
Such things as so-called religious superstition, belief in miracles,
were being downgraded in support of a rational Christianity,
a scientific approach to the world.
The Reformation was remembered
as the beginning of the epoch of the freedom of thought,
to liberate the world from the Dark Ages.

In 1917, the four-hundredth anniversary of the Reformation
was observed in Germany during the fourth year of World War I;
Martin Luther was cast primarily as a patriotic German figure;
the man who translated the Bible into his mother tongue,
creating the modern German language;
who liberated Germany from the encroachment of foreigners.

In 2017, there are a couple of things I’ve noticed.
First off, the five-hundredth anniversary of the Reformation is being sold.
It’s been a way to get tourists to ‘Luther-land,’
to Wittenberg where he supposedly nailed his Theses to the church door
and to the Castle Church where he translated the Bible. 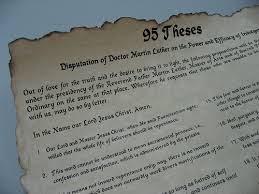 and special stoles for pastors and shot glasses and beer steins
and to advertise them to my church.
I haven’t passed any of these on
because I don’t really think the Reformation is about beer steins.
But maybe I was wrong!
Maybe you would have liked a 500th anniversary beer stein.
If so, you can get one yourself.
Just Google ‘Reformation Beer Stein.’
Hey, maybe you’ll get a few years off purgatory if you buy it!

In 2017, we have been reading in the newspapers
of the rapprochement between Rome and the Reformation churches.
At many events, Roman Catholics and Lutherans
have been commemorating the five-hundredth anniversary of the Reformation.
That word is chosen very, very carefully,
instead of the word celebrate.
For it is indeed one of the sad outcomes of the controversies of 500 years ago
that the unity of the church in the West was broken;
despite Jesus’ prayer ‘that they may all be one.’
How can we ‘celebrate’ the disunity of the One Church?
But we can certainly commemorate the good stuff together
and rejoice in how far we’ve come.

And yet, there are those Roman Catholics out there
who don’t like all this ‘Luther was really an OK guy’ stuff.
That’s okay, for there are lots of Lutherans out there (maybe even in here!)
who are less than comfortable with all this cozying up to Rome.
As a fellow seminarian said to me sixteen years ago,
during planning for a joint Roman Catholic-Lutheran service,
‘Whatever happened to Luther was right?’
So at the same time there are calls for unity,
there’s also more calls to strengthen our own separate identity.

And what will it be like one hundred years from now,
when the Reformation turns 600?
I wonder if Christians will really be interested.
After all, in one hundred years,
most Christians in the world will likely be African, Asian, or Latin American,
and they might or might not give much thought to an ancient European dispute.
But, then again, none of us will be around to find out!

You didn’t necessarily come to church today for a history lesson.
But you got a little bit of one anyway.
And it’s important to think about,
because what is the Reformation all about?
What should it be about?

Is Reformation Day our ‘Independence Day?’
A day to sing the Lutheran national anthem,
A Mighty Fortress is Our God?
A day to say, ‘Whatever happened to ‘Luther was right?’

Is Reformation a principle by which we may live our lives;
that we should be about abandoning tradition to embrace new thought?
That’s how some people view it.
Since Luther supposedly used drinking songs to set his hymns to music,
we ought to write pop music, or some such other thing.
Did Luther really use drinking songs, Joyce?
Yeah, I didn’t really think so.

No, Reformation was not about the triumph of reason over superstition,
nor was it about German national identity,
nor is it about proudly trumpeting our fading Lutheran heritage
with the latest commemorative bauble.

It’s not our ‘Independence Day’ as a church,
nor is it a principle by which we can live our lives. 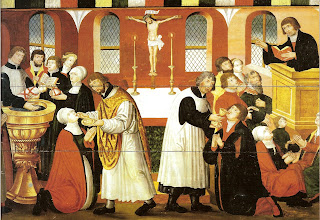 The Reformation was –
the Reformation is –
about one thing only,
about one person only –
Jesus Christ.
Martin Luther and the other Reformers wrote what they wrote
and said what they said and did what they did
so that the people could encounter Jesus and come to faith in him;
come to call his Father ‘Our Father,’
and be filled with his Spirit,
and fear, love and trust him in all things.
Anything that obscured or prevented the encounter with Jesus,
whether it be indulgences,
or tradition, or church hierarchy,
was to be challenged.
And anything which proclaimed Jesus was to be lifted up.

When we are encountering Jesus
as proclaimed in Scripture and sermon
and mediated by the Sacraments
then reformation happens.
We as individuals are re-formed,
in that by the Spirit of Jesus we are led into newness of life,
led to faith in the God who reconciles us
and to do works that serve the neighbor.
And we as the Church are reformed,
that our life together may proclaim Jesus and serve Jesus,
using whatever facilitates the encounter with Jesus.

What was the Reformation of five hundred years about?
It was about Jesus.
And it’s still about him.
Wherever he is proclaimed, wherever he is encountered,
then the Church is still being reformed,
because he is reforming us,
as a church around him, as people into his image and likeness.

We talk about Martin Luther and the others as Reformers of the Church;
but there is One Reformer of the Church –
the one whom they and we worship and praise –
even Jesus Christ our Lord,
who lives and reigns with the Father and the Holy Spirit,
one God, now and forever.