A vision in the night – a vision of the future.

Daniel has a dream in which he sees the four winds of heaven stirring up the great sea and four great beasts come out of the sea, different from one another. He is troubled by the vision. Who wouldn’t be? I think if you had a dream or a vision like that you might wonder if the food that you’d eaten the day before wasn’t having some sort of effect. You would immediately tell someone what you had dreamed during the night. But maybe part of you would be worried and wondering that you had seen something that had meant something else. 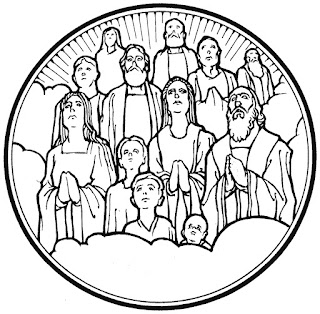 This was Daniel’s understanding as well. And so, he asks one of the attendants to tell him the truth concerning all this. Not all of us have angels sitting around to help us with dream interpretation. But Daniel does. And the attendant says, ‘As for these four beasts, four kings shall arise out of the earth. But the holy ones of the most high shall receive the kingdom and possess the kingdom forever – forever and ever.’

The angel gives Daniel an understanding of penultimate and ultimate things – that which precedes the eternal and that which is eternal. It’s vital in our lives to know what’s second-most important and what is most important; what is ancillary and what is essential; what is penultimate and what is ultimate. Most of us are focused on the penultimate. What shall we eat? What shall we drink? What shall we wear? Who shall be elected? What about the wars of the nations? What about the economy? What will the weather be tomorrow, next week? Will it be a cold winter or will it stay warm as it is today? The penultimate things – the things which are second in importance, that precede the end – this is what we are concerned about. And we have no shortage of pundits, prognosticators, and pollsters to tell us what we may expect – to tell us what to do to get an edge in the future world that is coming.

But that shouldn’t be our chief concern. You see, Daniel is given a vision in the night of the four great kings that will rise, the four great empires that will dominate the known world. But then he is given a further vision, the eternal vision, the ultimate vision: the holy ones of the most high shall receive the kingdom and possess the kingdom forever; forever and ever.

And so Daniel receives this vision of the penultimate and the ultimate things. The response is not then for Daniel to worry about those four great kingdoms that will arise. The response is joy and praise for what will be forever and ever.

We often think of saints as those who are the high achievers, who receive the perfect attendance awards in Sunday School, who always kept their noses clean. Some of them grew up to be Sunday School teachers themselves, or church musicians, or pastors. We think of the saints as ‘perfect’ people. And few among us would count ourselves as saints, for we know that we are not perfect.

In reality, the saints are those who live out of God’s ultimate future. Their existence on earth is not driven by the penultimate. Instead, the holy ones are those who believe that they will possess the kingdom forever and therefore their lives here among the penultimate things are not shaped and determined by those things, but by their ultimate destiny.

The saints may be high achievers, but also may not be. Some are known to us and some are unknown to us. If they are really saints, they are saints without knowing it themselves.

We call them ‘holy ones,’ and yet on many Sundays we will sing of Jesus Christ, ‘You alone are the Holy One.’ How then are there many saints, many holy ones? The answer, of course, is that they are made holy by the indwelling of the Holy Spirit. The only one who is holy gives them his own spirit so that they may share in his holiness.

We observe the day of All Saints to remember that Christ dared to share his holiness with people such as us, and to remember that the holy ones live out of the ultimate vision of the kingdom of God and not from our visions of the penultimate, that which is less than important.

If we were being honest with ourselves, if someone would come and say I will show you a vision of the future, most of us would focus on the penultimate. Very few of us would dare ask about the ultimate, the eternal. But we have no need of pundits, prognosticators, or pollsters, for we have been given prophets. We have been given a Lord Jesus Christ who says, ‘Blessed are you who are poor, hungry, who weep, and who are persecuted,’ all on account of him, for their reward is great in heaven. This is the vision of the future, and our lives in the present ought to be ordered by that vision.

Saints are not the ‘A’ students only. Saints are all who are called according to God’s purpose from the beginning to the end. We rejoice in God’s saints, those who live from the future, whose lives are defined by God’s future of the kingdom, which has broken into our world in Jesus Christ our Lord.