'Some people have a strange term or expression for what’s going on here today. The expression is ‘worship service.’ What can that mean? What is the service that takes place at a service of worship? Who is serving, and who is being served?'

Some people have a strange term or expression for what’s going on here today. The expression is ‘worship service.’ What can that mean? What is the service that takes place at a service of worship? Who is serving, and who is being served?

The same questions could be asked of our Gospel lesson. But we think we know a little bit more about what is happening in that story. Martha is the one who is serving Jesus. She has opened her home to the one who said of himself, ‘Foxes have holes, and birds have nests, but the Son of Man has nowhere to lay his head.’ As a daughter of Abraham’s faith, she is showing hospitality to him, for surely she would have heard the rabbis telling the story from Genesis of Abraham at the oaks of Mamre, when he welcomed the three travelers and provided for their needs. And so she is busy providing for his needs. 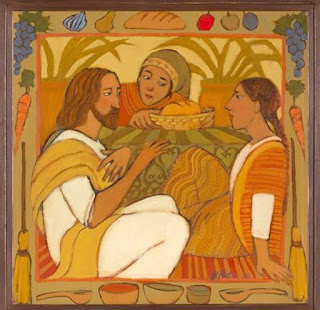 When Dietrich Bonhoeffer led the illegal seminary in Finkenwalde in Nazi Germany in the mid-1930s, he taught his young students in ministry that the first service they owed to their neighbor, either their fellow seminarians or their eventual parishioners, was to listen to them. He went on to say that pastors who couldn’t listen to others would eventually stop listening to God Himself. What a terrible vision, a world full of preachers thinking they are serving others but really just filling up the world with empty words. I hope that never happens.

I’ll leave it up to you to decide in what sense your pastor fits that description. But Bonhoeffer asked his students: how could they speak the right word if they hadn’t listened first, so they could discern what the right word to speak was in a particular situation? Certainly Bonhoeffer, a man of many, many words, was not against serving others by speaking. But most likely he was also aware, not only by listening to others but perhaps humbled by his own experience, about the dangers of speaking before listening.

Often we cannot tell how to serve a person rightly until we listen to them. The late Orthodox archbishop Anthony Bloom tells a story of how, when he was a physician during the Second World War, a wounded German was brought into his hospital with one finger smashed by a bullet. As Bloom tells it, ‘The head surgeon came round and looked at the finger and said, ‘Take it off.’ That was a very quick and easy decision – it would take only five minutes to do. Then the German said, ‘Is there anyone here who can speak German?’ I spoke with the man and discovered that he was a watchmaker and if his finger was removed he would probably never be able to work again. So we spent five weeks treating his smashed finger and he was able to leave the hospital with five fingers instead of only four…’

So perhaps Jesus is not telling Martha not to serve – he is showing her how to serve better, to listen to him and he will show her the kind of service she is to do. He will show her the words to speak, show her the tasks she must do, but she must listen first. Is this what is going on here? Perhaps, in a way, but we must go deeper. Let’s go back to our questions – who is serving, and who is being served?

Martha has welcomed Jesus into her home – he has become her guest. As such, she has believed it was her role to serve him. But what if the roles are reversed? What if it is not Martha who is the host, but Jesus? After all, Colossians tells us that ‘in him all things in heaven and on earth were created, things visible and invisible.’ When Martha encounters Jesus, she is encountering her Creator and her Redeemer, for he is also the one who will reconcile sinners to God his Father through the offering of his life on the cross.

This is even more important of a guest than she thinks! No, she is his guest, he is the host – and he wants to show hospitality to her, to make her distraction cease, to tell her, to show her, who she truly is and whose she is. In Jesus’ presence, our distractions may cease. Distraction is to lose focus, in the presence of many urgent demands and many powerful messages, of who we truly are, who we were made to be in God’s sight, and who God is. Colossians reminds us that Christ Jesus ‘is the image of the invisible God.’ If we want to know the character of God, we go to Jesus Christ.

We use the words, ‘Serve the Lord.’ And these are appropriate words. They’re Scriptural words. But we can realize with gladness that in Jesus, the Lord serves us, by speaking to us a clear Word: who he is and who we are and who we were made to be. Those words in Colossians are amazing to us. The cosmos is made for Jesus Christ because it was made through Jesus Christ. The world was not made for Vladimir Putin, neither was it made for Elon Musk – it was made for Jesus Christ! Perhaps the only man or woman it could be entrusted to. It is of him that the psalm speaks, ‘He has sworn to do no wrong and does not take back his word.’ Each human being is created in and for Jesus Christ, who alone swears to do no violence to those whom he has created but instead swears to nourish us and sustain us and redeem us and heal us and present us to God the Father holy and blameless. For it is he who reconciles us to God the Father, making peace through the blood of his cross.

In this way the worship service is a service – but it is God’s service to us in which he speaks to us a word that creates us anew. In this blessed time, in the presence of the Word, we are recalled to ourselves, all our distractions may be laid aside. We sit at Jesus’ feet in the posture of a disciple, like a lily opened to the sun, like the soil waiting patiently for the rain. Let nothing and no one take this time away from us; let no distraction or urgent matter interfere with the one thing we need – let us never neglect to come be his guest and to be wholeheartedly in his presence, for he desires to serve us. He seeks to reveal himself to us and who we are in him.

In a paradoxical sense, the best service we can give Jesus is to allow him to serve us. We attend to his attention to us; we listen to him. we cease from our doing so that he may teach us how to be. For if you have observed others, you know that when they show hospitality, when they serve others, it is not so much that they do things that are separate from themselves but their actions are at one with who they are at heart. They have a remarkable capacity to be aware of what is truly needed, to be present wholly in a situation so that what they do is a simple expression of who they are. It is true for Jesus; in him it is true for his disciples as well.