'But if you come to worship and call yourself a Christian, and you say you believe in one, holy, catholic, and apostolic Church, and then you don’t know what it is, whose fault is that? That’s my fault.'

The Third Sunday of Easter

When we confess the Nicene Creed this morning, we will say these words toward the end:

We believe in one, holy, catholic, and apostolic Church.

But if you come to worship and call yourself a Christian, and you say you believe in one, holy, catholic, and apostolic Church, and then you don’t know what it is, whose fault is that? That’s my fault. You called me to be your pastor and teacher, and that means it’s my responsibility that you at least have the opportunity to know what the one, holy, catholic, and apostolic Church is. If I’ve never made sure you know and can tell other people, that’s on me. Now if you don’t come to listen and learn, that’s another story entirely. That’s on you. 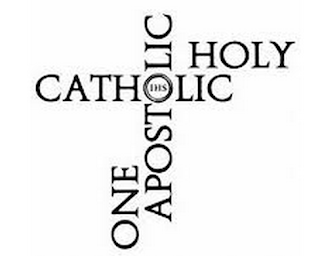 So in order to meet my responsibility, I’m going to talk about the one, holy, catholic, and apostolic Church over the next few weeks. This is related to Easter, because it is the risen Jesus who calls the Church into being. Someone may like Jesus, and his teachings, but they are not Christians if they do not believe that there is a Church. For to be a Christian is to believe in the Church he founded and indwells.

That doesn’t mean that he founded specific denominations. That doesn’t mean that he looked forward to specific denominations, church constitutions, budgets, property committees, Easter breakfasts, even Walks for Water. But he wanted a Church, and the Church is the people who are disciples, who testify to the good news about his resurrection. You all remember that song, right?

All who follow Jesus, all around the world, Yes, we’re the Church together.

In the Gospels, Jesus chooses from his disciples twelve ‘apostles,’ people to be sent out. Peter is always the first named apostle. But there are others, some of which we remember, like James and John and Andrew and Thomas, and certainly we remember Judas, the one who was called to be an apostle, and instead betrayed him. But whether we remember them or not, there are twelve in all, to correspond to the twelve tribes of Israel.

These were they who followed Jesus and were sent out ahead of him. These were they who fled from Jesus in the Garden of Gethsemane. But these also were they whom Jesus encountered after his resurrection, We hear today the story of when he feeds them on the beach of the Sea of Galilee. He cooks for them and invites them to breakfast. What a meal that would have been! And yet we may be able to see more than hospitality in this breakfast. We may be able to see a Holy Communion with the risen Jesus; we may be able to see a meal given to strengthen the apostles for the task they are to be given, to once again be sent out ahead of the risen Jesus to proclaim his kingdom and to witness to his power.

Then Peter is given a confirmation of his apostleship. He had denied Jesus three times in the courtyard of the high priest. The three questions of Jesus, the three declarations of Peter’s love and the three commands of Jesus correspond to these denials. In these commands to tend and feed the flock, Jesus tells Peter that his mission is not negated. He is still the head of the apostles, he will be the one to lead them in their confession of the risen Jesus, as we heard last week: The God of our ancestors raised up Jesus, whom you had killed by hanging him on a tree. God exalted him at his right hand as Leader and Savior that he might give repentance to Israel and forgiveness of sins.

While Peter’s apostleship is confirmed, we see in the first lesson the inauguration of Paul’s apostleship. Paul has not simply denied Jesus, he has persecuted his followers, the people to whom Peter and the other apostles had preached and called them to discipleship of Jesus. He was present when Stephen had been stoned to death, and had approved of his execution. Yet he is made, also, too, a witness to the resurrection; a ‘sent out’ one; an apostle; who once persecuted the Church, yet now tells others of Jesus, ‘He is the Son of God.’

There are disquieting notes near the conclusions of both of these call stories. The risen Jesus says to both Peter and Paul that there is suffering involved with being sent out to proclaim the Gospel. Peter is told that he will stretch out his hands and someone will fasten a belt around him and he will be taken where he does not wish to go. The risen Jesus tells Ananias that he will show Paul how much he must suffer for the sake of his name.

Church tradition tells us that both Peter and Paul met martyrdom at Rome in the mid-60s A.D. during the persecution of Nero. Paul, as a Roman citizen, was beheaded, but Peter, a non-citizen, was crucified upside down. Apostleship may bring fame, but not ease, glory and power. Instead, it is a road that can be trodden only if one loves Jesus.

We return to the question: what does it mean to be the apostolic Church? It means at least two things. Firstly, we are founded on the message of the apostles about Jesus, that he is the Son of God, that he was raised from the dead in order to give repentance to Israel and forgiveness of sins, and that he has given the Spirit as a guarantee of the hope to which he has called us.

In the beginning of the worship service, we have what is called the apostolic greeting between the presiding minister and the congregation. It comes from the letters of Paul, when he says a variation of ‘The grace of our Lord Jesus Christ, the love of God, and the communion of the Holy Spirit be with you all.’ To which the congregation responds, And also with you.

Some worship books abbreviate this as the greeting. This is not a good idea. This is more than just a hi-how-are-you between the minister and the congregation. The term apostolic greeting intimates that what is happening in the worship service is an encounter between the apostolic witness to Jesus and the people . The liturgy puts the apostolic greeting in the mouth of the minister because in the ministry of the Word, the Gospel the apostles proclaimed comes among us in this time and place. When we celebrate the Communion, we do so also with an apostolic word, ‘In the night in which he was betrayed, our Lord Jesus took bread,’ etc.

So this is what it means to believe in an apostolic Church; the Church which is founded upon the witness of the apostles to the resurrection of Jesus. But, of course, it is more than that – the Church is also apostolic today because it is sent out to those inside and outside its walls to preach that same Gospel. We have no apostles with us, but we bear the apostolic message that Jesus is raised from the dead. We do not own the message – it is handed down to us in order that we may hand it on to others.

One of the most attractive things about our congregation’s support of Water Mission is that the holistic needs of people are met by this ministry. This is why the system that purifies water for the communities in need is called ‘Living Water Treatment System.’  Just as the early apostolic Church both preached the Gospel to people and provided for the healing and sustenance of their bodies, so the apostolic Church today works to quench people’s thirst of body and spirit, the meeting of human need testifying to the power of the risen Jesus in the world.

We believe in the apostolic Church. The message of the apostles is the message which we encounter today: Jesus Christ is Lord. Having received this message, we are sent to those inside and outside the church to hand on this message, that the Gospel may take root and grow and flourish.