'It is only in this way, Jesus knows, that Thomas can be convinced – not because Thomas is a particularly suspicious person who won’t believe without proof, but because his innocence has been stripped from him, torn cruelly from him by the violence visited upon Jesus, and the only way he can regain it is to know and see for himself that the guilty world has not been able to destroy the one in whom he had so trustingly believed.'

The Second Sunday of Easter

An excerpt from the Easter Vigil Proclamation:

The holiness of this night puts to flight the deeds of wickedness;

washes away sin; restores innocence to the fallen, and joy to those who mourn;

People speak of ‘the loss of innocence.’

This is what happens to children when they realize that not every story has a happy ending; when the world enchanted by fairies and gnomes, friendly old men who bring gifts, and fantastic creatures is succeeded by the world of full of indifferent systems and real monsters.

This loss of innocence can be cushioned and formed in an environment of love – or it can be cruelly torn from a child by violence, sexual abuse, falsehood, and poverty.

I had the news on in the background this past week while I was doing other things. The story was of a young refugee family from Ukraine. A boy was asked how old he was. He said, ‘I’m nine years old. But I’m a man now, because my school was bombed.’

His six-year-old sister’s main problem was that she had no one to play with. She would immediately attach herself to any family which would come into the refugee camp in which she was staying.

With war and violence comes the loss of innocence and with it comes the loss of faith. Faith in God is often the first casualty of war, because it destroys the illusion of a friendly universe. One might trace the massive falling-away from faith in the Western world to the documented experience of war: from the gas-chambers and charnel-houses of the Nazi extermination camps to the atomized remains of Nagasaki and Hiroshima; from the naked young Vietnamese girl in agony from a South Vietnamese napalm attack to the men and women plummeting to their death from the World Trade Center in 2001.

Even those of us who have not been the direct targets of violence have been contaminated. For even to witness violence from afar stirs in us the fear of violence happening to us. To excuse ourselves from guilt for the violence and participation in the violence, to justify the violence, to deny the humanity of those upon whom violence is visited. We want to exculpate the good God whom we fashion in our näivete from responsibility for the violence. This is why we hide our eyes, so that we ourselves may not lose our innocence. But we cannot help ourselves. To see violence directed against another person is to ourselves lose our innocence, to be infected by the guilt of the world.

And it is why so many atheists are so angry. We wonder why. We think that atheists ought to be the happiest people on earth – no hell threatening them. But when an evil person dies, an atheist often is loudly proclaiming their anger. It’s almost as if, though they believe there is no god, they wish there were a hell in which that heartless person could be tortured for all eternity. The reason is that they themselves often wish they could have been judge and jury – and they realize that, on some level, there must be a judgment on evil. They have been cheated of executing the one who has stolen their innocence and the innocence of others – and it terrifies and enrages them.

The Easter proclamation says, the holiness of this night…restores innocence to the fallen. This does not simply mean that the judgment against guilty sinners is laid aside and we are declared innocent, though it does mean that. It means that the Easter event, the resurrection of Christ, actually has the power to restore innocence. It may be a hard-won innocence, but it is innocence nonetheless.

Thomas, along with all the other disciples, has witnessed the violent end of Jesus’ mission. He himself became guilty of it by not preventing it; and he has, in effect, become a functional atheist, for he cannot believe the good news the other disciples of Jesus when they tell him that they have seen the Lord. But we shouldn’t be so hard on Thomas. The rest of the disciples did not believe either, when the women had come to them on Sunday morning and told them of the message of the angels.

We think of Thomas as a stubborn person who demands proof that more religious people can take on faith. But this is not what Easter means. Easter is not to hide our eyes from the suffering of the world and deny that it is real. It is not to deny that death is real. It is to have revealed to us by the living Lord that our innocence may be restored.

Jesus does what Thomas asks – it’s no more and no less than what he needs. He shows him his wounds - God’s own wounds. Jesus tells Thomas to see and feel that this person standing before him is somehow still the disfigured, ravaged person who had been bullied and beaten and bruised and finally punctured and left to hang on a cross until all the breath was out of him.

It is only in this way, Jesus knows, that Thomas can be convinced – not because Thomas is a particularly suspicious person who won’t believe without proof, but because his innocence has been stripped from him, torn cruelly from him by the violence visited upon Jesus, and the only way he can regain it is to know and see for himself that the guilty world has not been able to destroy the one in whom he had so trustingly believed.

Five grains of incense protrude from the paschal candle; the altar wood is emblazoned with five crosses – one in the center and four at the corners. The same is true for the fair linen in which is embroidered five crosses. Do you know why they are there, and why five in particular? It is not for symmetry alone. These represent the five wounds of Christ on the cross – two for his hands, two for his feet, one for his side – the wounds which Jesus invited Thomas to see and touch, that he might believe that though marred and disfigured, Innocence had not been destroyed.

This would have been the end of the sermon, had I not wondered, as I was writing, what had happened to that Vietnamese girl in the famous photograph I hope you will indulge me as I tell you her incredible story. 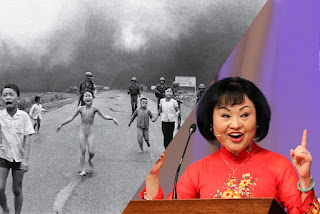 Her name is Phan Thi Kim Phuc. Fifty years ago, she was nine years old; the same age as the young boy from Ukraine who became an old man the day his school was bombed by the Russians. She was South Vietnamese, but on June 8, 1972, the South Vietnamese Air Force made a napalm strike upon Vietcong positions, and Kim, along with other children, were caught in the raid. Her clothes were saturated with the defoliant. In agony, she ripped them from herself, screaming ‘Too hot! Too hot!’

It was the photographer, Nick Ut, who saved her life. After he took the picture of her, he saw her skin coming off. He and another person poured water over her. He took her to the hospital with third-degree burns. Nobody wanted to waste time on an obviously dying girl until he used his status as a member of the press to threaten them into doing so. She was not expected to survive, but after fourteen months and seventeen operations, she was finally released from the hospital. She endured terrible pain throughout her ordeal, and remained in pain even after her release.

A few years ago, she shared her story in Christianity Today, writing: ‘(F)or years, I prayed to the gods of Cao Dai (her ancestral religion) for healing and peace.’ None came. ‘And,’ she says, ‘I continued to bear the crippling weight of anger, bitterness, and resentment toward those who caused my suffering – the searing fire that penetrated my body; the ensuing burn baths; the dry and itchy skin; the inability to sweat, which turned my flesh into an oven in Vietnam’s sweltering heat. I craved relief that never would come. And yet, despite every last external circumstance that threatened to overtake me – mind, body, and soul – the most agonizing pain I suffered during that season of life dwelled in my heart.’

In 1982, she visited Saigon’s central library, pulling Vietnamese books of religion off the shelf, one by one. She found a copy of the New Testament off the shelf and went through the Gospels. After she did so, she wrote, ‘Two things had become abundantly clear.

‘First, despite all that I had learned through Cao Dai – that there were many gods, that there were many paths to holiness, that the burden of ‘success’ in religion rested atop my own weary, slumped shoulders – Jesus presented himself as the way, the truth, and the life…Second, this Jesus had suffered in defense of his claim. He had been mocked, tortured, and killed. Why would he endure these things, I wondered, if he were not, in fact, God?’ I had never been exposed to this side of Jesus – the wounded one, the one who bore scars. I turned over this new information in my mind as a gem in my hand, relishing the light that was cast from all sides…Perhaps he could help me make sense of my pain and at last come to terms with my scars.’

Kim Phuc became a Christian. She married a North Vietnamese man and in 1992, they requested asylum in Canada and became Canadian citizens. She founded the Kim Foundation to help provide medical and psychological assistance to the children who fall victims of war, and traveled the world as a UNESCO goodwill ambassador, sharing her stories with people and telling them how horrible war is and how innocent people suffer the most from it.

Kim Phuc with Nick Ut, who took her famous photo

She has become friends with Nick, the photographer who both took her picture and saved her life. And, she says, she has gained the ability to pray for her enemies and forgive them. She still has pain, but she prays and makes up her mind not to concentrate on the pain. She writes, ‘I realize that those same bombs that brought so much suffering also brought great healing. Those bombs led me to Christ…I thank God for that picture. Today, I thank God for everything – even for that road. Especially for that road.’

A world that, like Thomas, has lost its innocence, needs this story of Kim Phuc  – it needs to see her wounds and put its fingers into her scarred skin and believe that the Spirit of the living Jesus has transformed those scars into a testimony that the innocence of the fallen can be restored. See with your eyes, put your fingers into the wounds of Christ branded on her body, and in so doing, perhaps he who is the way, the truth, and the life can, in her words, ‘help you make sense of (your) pain and at last come to terms with (your) scars.’ The holiness of this night.…brings innocence to the fallen and joy to those who mourn, casts out hate, brings peace, and humbles earthly pride. Amen.

1.        Reginald Ben-Halliday: The Story of the Napalm Girl and the Photographer Who Saved Her Life (https://historyofyesterday.com/the-story-of-the-napalm-girl-and-the-photographer-who-saved-her-life-5b9f61229d58)