'(E)ach part of the Nicene Creed speaks of the persons of the Holy Trinity as creator. ‘We believe in God, the Father almighty, maker of heaven and earth.’ ‘We believe in Jesus Christ…through (whom) all things were made.’ ‘We believe in the Holy Spirit, the Lord, the giver of life.’

The week before last, Rebecka and I were at Trinity School for Ministry for their annual conference, the topic of which was ‘Engaging the Doctrine of Creation.’ I didn’t tell her this, but I wasn’t that enthused about the topic. What can you say about the doctrine of creation? Christians often seem much more concerned with the doctrine of redemption. That is the one that gets the most space in the creed; the work of God the Son who redeems us by his incarnation, death, and resurrection. God the Father, creator of heaven and earth, gets rather short shrift, and God the Spirit gets a few words at the end. Why were we talking about creation, then? If there’s anything most religions can agree on, it’s that God created the universe. The ‘how’ is always in question, but the fact that God created is usually beyond douct.

Well, I was wrong, not for the first time. The speakers’ presentations were full of things to think about. At the end, ‘my brain was full.’ And there’s a lot more that is engaging about the doctrine of creation than I thought.

How do people look at creation? Some people today look at the creation as simply a resource; as if minerals, plants, and animals were at the disposal of human beings simply to increase our wealth and comfort. Indeed God intends that the creation serves humanity – but humanity is also to serve creation as a steward and protector.

In the ancient world, there were competing stories about creation – not just of how it was done, although that is true. But we are used to hearing from Genesis 1 that God created the world and its creatures ‘and saw that it was (very) good.’ That wasn’t a universal belief in the ancient world. For example, many people believed that the earth was at best a flawed creation, at worst it was actually bad, and our souls were ‘trapped’ in our bodies. We needed esoteric or secret knowledge to free our souls from the prisons of our bodies and stop being reincarnated into the world. This, of course, is what many people believe today in various forms. Such a belief can lead to excessive self-indulgence, because the things that are done in the body don’t matter, or to excessive self-denial, because if you indulge the body you neglect the soul and will simply be reincarnated, perhaps into a lower form.

That’s only one of the ancient beliefs about the creation. Certainly it is different than ‘God saw everything that he had made, and indeed it was very good.’

Then there is the modern belief that the universe is neutral or malevolent and we are not created good by a beneficient God, but that we simply are a product of the universe and what we make of ourselves is up to us. This worldview is often called the ‘scientific’ one, with its indication of sophistication and knowledge, but really it is a spiritual worldview. Science should not be feared by Christians. Science may tell us more about the world, the ‘how’ of things, but it cannot tell us the ‘why.’ For that we need philosophy and religion.

How different is our first reading today when God asks Job: does he understand how God created the universe? God says that ‘the morning stars;’ i.e. the angels, sang for joy at the creation of the universe.

And each part of the Nicene Creed speaks of the persons of the Holy Trinity as creator. ‘We believe in God, the Father almighty, maker of heaven and earth.’ ‘We believe in Jesus Christ…through (whom) all things were made.’ ‘We believe in the Holy Spirit, the Lord, the giver of life.’ 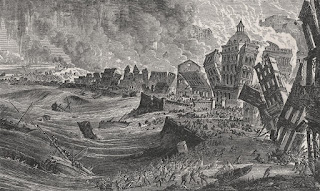 What then are we to make of instances when God’s good creation seems either neutral or even malevolent? In 2011, a terrible 8.8 earthquake struck the ocean off Japan. Many people were killed and a meltdown occurred at a nuclear plant on the eastern coast. It is said also that a main reason that the great French philosopher Voltaire rejected Christianity was because of a similar earthquake, known as the ‘Lisbon’ earthquake which caused many deaths and damage to cathedrals with worshipers in them: on All Saints’ Day, ironically. Voltaire and others could not reconcile a good and loving God who made a perfect creation with the Lisbon earthquake.

Why, if God’s creation is good, do bad things happen in it? In Romans 8, St. Paul writes that in a mysterious way, the creation is affected by the presence of evil and sin in the world and that this will be redeemed when Christ is revealed in glory. ‘For the creation waits with eager longing for the revealing of the sons of God. For the creation was subjected to futility, not willingly, but because of him who subjected it, in hope that the creation itself will be set free from its bondage to corruption and obtain the freedom of the glory of the children of God.’ Science may describe weather, volcanoes, earthquakes, but religion also has its role – to say that God’s intention for creation was not and is not destructive, but beneficial for all his creatures. 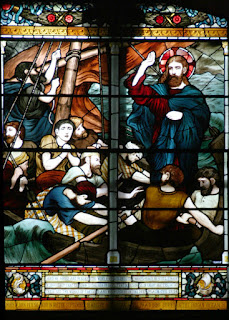 When Jesus stills the storm on the sea of Galilee, he is not merely saving his own life nor doing something nice for his disciples. He is revealing that he is the one through whom all things were made and in whom creation is being knit back together to be in right relation with God and with God’s people. Knowing this, we may also believe that God’s creation is good – even when disease strikes us, when weather threatens us, and when death comes for us. We are sustained by the hope that the same Christ who redeems us will also redeem the whole creation because through him it was made and by him all will be restored.