The women who went to Jesus’ tomb on that Sunday morning so long ago went to anoint Jesus’ body as a sign of their love for Jesus, who had been so cruelly taken away from them.

Had they found Jesus – had they arrived at the tomb and anointed Jesus’ dead body, that would have been the end of their following. They would have remembered Jesus with love, with reverence – but it would have been only memory. Their lives would go on. Perhaps they would visit the tomb each Passover when they were in town for the annual feast, to honor the man who had said and did so much in God’s name and had been so cruelly taken away from them.

Instead, that Sunday morning, they were given a sign – and the sign was an empty tomb. Jesus had simply left the tomb behind. It took an angel to explain what had happened, but the sign remained. 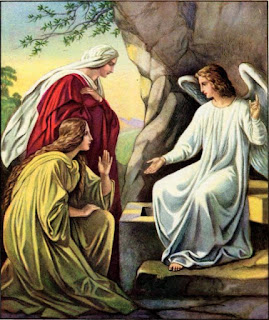 What is the sign of God’s promise that we seek? We seek the absence of the body of Jesus.

That is what we get in the Easter Gospel this morning. Instead of a presence, we have an absence. The women find the tomb, but they do not see Jesus. And that’s so important. For, at least at first, it is not so much what we see but what we do NOT see. We do not see Jesus’ dead body.

Other world religions make shrines of the places where their founder’s body lies. But Christians do not make pilgrimages to a place where Jesus’ body rests. Yes, there are a couple of places in Jerusalem which purport to be Jesus’ tomb, which might be where the women visited on the first Easter morning. But the one thing that you’ll not find there is Jesus’ body. The only thing you’ll find is an absence.

The Son of Man has authority on earth to forgive sins (Mark 2:10).

Blessed are you when others revile you and persecute you and utter all kinds of evil against you falsely on my account (Matthew 5:11).

If by the finger of God I cast out demons, then the kingdom of God has come among you (Luke 11:20).

Everyone then who hears these words of mine and does them will be like a wise man who built his house on rock (Matthew 7:24).

I am the Resurrection and the Life. Those who believe in me, even though they die, yet they will live; and those who live and believe in me will never die. (John 11:25)

A dead man cannot make promises, nor can he keep them. But a man who is alive, who has left death behind, can make and keep promises to us. We take the sign of the women coming to an empty tomb, the absence of the dead body of Jesus, as a sign that Jesus can still keep his promises to us.

He is not someone we come to memorialize, to remember as if he were gone, to hear his stories as stories in a history-book, to learn a lesson from his life. Instead, we come here to encounter someone who is alive. When his words are spoken here in the presence of his community, it is a living person who speaks – because there is no dead body. When his meal is celebrated in the presence of his community, because there is no dead body, it is a living Jesus who gives himself in the bread and wine which is his body and blood for us.

Because the women went to the tomb on Easter morning and find no dead body:

we have the forgiveness of our sins;

we are blessed even in our sufferings;

the kingdom of God has come among us, defeating the evil powers;

we have rest for our souls;

we can build on the foundation of Jesus’ words and teachings,,

and we have victory over death.

For some of Jesus’ followers, the resurrection was accompanied by appearances of Jesus. These we heard about in the other readings: both Peter and Paul telling others that they encountered a living Jesus. But most Christians were not given the sign of those appearances. Instead, we like them encounter nothing but an empty tomb, and hear from the angel and the apostles what this empty tomb means: that God has kept all his promises through Jesus Christ.

And so, rejoice in the sunshine and the flowers, the fact that we have made it through this past year despite it all, that we are here together and that even those far away can share in some way in our togetherness. But most of all, rejoice this Easter, is what was not found: a dead Jesus, for this means that in him that the promises of God live: forgiveness, life, healing, salvation. Rejoice in the hope of a new world, a new world where God will be all in all and every knee shall bend at the name of Jesus and every tongue confess that he is Lord to the glory of God the Father. Into his kingdom will be brought the glory and honor of the nations; every culture of every time and place bringing its best to God. Everything that is good in this world will be perfected, and everything that is evil will be either healed or uprooted. Pray in the expectation that God is making you fit for this new world, so that even in the midst of the old and weary world with all its ugliness God is still present among his people and in each of the baptized by the power of the Holy Spirit.

Because of what the women did not find that morning long ago, we can hope for these things and for far more than we can ask or imagine.