'Of course, we are not talking about a literal vineyard and literal tenants and a harvest of fruit and grain. We are talking about what happens when the people of God do not give back praise and honor and service to God. God has given us life, he has sustained us with every good thing of the earth, he has given us his commandment that we might live in peace with our neighbors and his promise that we might put our faith in him.'

[Jesus said to the people:] 33“Listen to another parable. There was a landowner who planted a vineyard, put a fence around it, dug a wine press in it, and built a watchtower. Then he leased it to tenants and went to another country. 34When the harvest time had come, he sent his slaves to the tenants to collect his produce. 35But the tenants seized his slaves and beat one, killed another, and stoned another. 36Again he sent other slaves, more than the first; and they treated them in the same way. 37Finally he sent his son to them, saying, ‘They will respect my son.’

38But when the tenants saw the son, they said to themselves, ‘This is the heir; come, let us kill him and get his inheritance.’ 39So they seized him, threw him out of the vineyard, and killed him. 40Now when the owner of the vineyard comes, what will he do to those tenants?” 41They said to him, “He will put those wretches to a miserable death, and lease the vineyard to other tenants who will give him the produce at the harvest time.”
42Jesus said to them, “Have you never read in the scriptures:
‘The stone that the builders rejected
has become the cornerstone;
this was the Lord’s doing,
and it is amazing in our eyes’?
43Therefore I tell you, the kingdom of God will be taken away from you and given to a people that produces the fruits of the kingdom. 44The one who falls on this stone will be broken to pieces; and it will crush anyone on whom it falls.”
45When the chief priests and the Pharisees heard his parables, they realized that he was speaking about them. 46They wanted to arrest him, but they feared the crowds, because they regarded him as a prophet.

Yesterday Rebecka and I went to a farmer’s market to get some birdseed, because the birds are eating us out of house and home. While there, we were surrounded by the bounty of the year. Freshly picked concord grapes, apples and apple cider, pumpkins from the pumpkin patch. I am grateful for supermarkets, but there is something about getting your food from a farmer’s market or a roadside stand. You are that much closer to where the food came from, you are that much closer to the soil and the sun and the rain that God gave for its growth and the people who by God’s gracious giving sowed the seed and reaped the produce. The harvest is not some idea, but the real thing.

The harvest belongs to God. This is the theme of our Scripture readings today, expressed in a negative fashion in the Old Testament lesson and the Gospel reading. In those Scriptures we see the harvest withheld. The prophet Isaiah depicts a vineyard which has been planted with care and given every advantage of soil, and yet it does not yield as it should, its fruit is bitter, it gives no advantage to anyone. In the Gospel, Jesus tells us about history’s dumbest tenant farmers, who decide to keep all the produce for themselves and assume that no harm will thereby come to them. In both cases the harvest is withheld from the one who planned and planted it.

Of course, we are not talking about a literal vineyard and literal tenants and a harvest of fruit and grain. We are talking about what happens when the people of God do not give back praise and honor and service to God. God has given us life, he has sustained us with every good thing of the earth, he has given us his commandment that we might live in peace with our neighbors and his promise that we might put our faith in him.

The harvest belongs to God. In other words, everything belongs to him. He gets back what he has put into the world. But so often we forget this and receive the world as if it were ours to do with as we please.

Harry Wendt is the author of the ‘Crossways’ Bible study series, which has been used all over the world. He likes to call God the ‘Maker and Owner.’ One of the drawings in the book is a human being with a tag on, as it were, marking the owner. Now I’m not a visual-aids preacher or one who uses props, so you just have to imagine yourself with a tag on you, saying ‘God’s person.’

What would it be like if we had ownership tags on ourselves, or even on the things we used each day? How about ‘God’s refrigerator?’ Could we not think that this is wonderful, that God lends us his refrigerator so that we might keep our food until we can use it? Then we can heat it up in ‘God’s microwave.’ How about ‘God’s television,’ or ‘God’s smartphone’? Does this change how we use these things at all?

Perhaps we should have an ownership tag on our clocks or watches which says, ‘God’s time.’ He lends us time, for our rest, for our work, for our eating and drinking and play, for serving him and getting to know him and what he’s done for us. What if we had an ownership tag on our wallets? God’s money? Yes, for our sustenance and our shelter and our self-care, and for using to benefit others and to spread the Gospel.

But really, it’s not about things or even time or money. It’s about us. The harvest of our entire lives belongs to God. It is his. We are called to give him what is his due. We should not hold back, as if by holding back we could somehow keep what is his for ourselves, or because we are afraid that if we don’t keep it, we will not share in the harvest.

For our example, we look to Jesus. Jesus gave the entire harvest of his life to the Father. On the cover of our bulletin today is an extremely evocative piece of art, a depiction of Jesus in a winepress. Jesus is being pressed, squeezed, and the ‘juice,’ if you will, of his life is his blood which comes to us in the Holy Communion. It’s an arresting image, and perhaps it’s a little hard to think about Jesus being pressed in a winepress. But if we think about it, his suffering and death, the giving of his life back to the Father, yielded precious fruit which satisfies us for salvation. 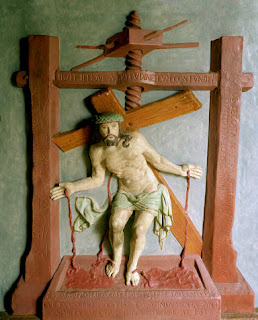 And we too are called to give our lives back to him. If you will, our lives are squeezed or crushed in the winepress so that which is good can be harvested for God. This is not a literal physical act, but suffering for God’s sake, which is prayer for and forgiveness of others and living as a Christian, is sharing in Christ’s death. And those who share in Christ’s death do not fail to share in his resurrection. The harvest is shared among all Christ’s people.

There is only one thing more, and that is that some of us may feel that we don’t want to give the produce of our lives to God because God wouldn’t want it. We might feel we’ve wasted our chance, that our lives are too full of sorrow or sadness or sin, that we’re more like that vineyard in Isaiah that yielded wild grapes which aren’t good for much. But we should give God everything, even with its sorrow and sadness and sin, for we cannot judge what God will make of us. The harvest is his, and in Christ the harvest is beautiful, even if we cannot necessarily see how or why. And so do not be afraid to give what is yours and even you yourself to God who has given all that is. Amen