'The good news of the kingdom of heaven, that in Christ God is reigning here and now, is bad news indeed for those who would reign instead of God. But more than that, it is bad news for us insofar as we want to control our own lives, make our own decisions without hearing God’s Word, and be satisfied with our own righteousness. There is a resistance we all have to God’s Word that simply can’t be discovered until we run up against the one thing that reveals to us how bitter the Word is for our old self.'

Link to broadcast of sermon, beginning with Gospel lesson

[Jesus said to the twelve:] 24“A disciple is not above the teacher, nor a slave above the master; 25it is enough for the disciple to be like the teacher, and the slave like the master. If they have called the master of the house Beelzebul, how much more will they malign those of his household!  26“So have no fear of them; for nothing is covered up that will not be uncovered, and nothing secret that will not become known. 27What I say to you in the dark, tell in the light; and what you hear whispered, proclaim from the housetops. 28Do not fear those who kill the body but cannot kill the soul; rather fear him who can destroy both soul and body in hell. 29Are not two sparrows sold for a penny? Yet not one of them will fall to the ground apart from your Father. 30And even the hairs of your head are all counted. 31So do not be afraid; you are of more value than many sparrows.  32“Everyone therefore who acknowledges me before others, I also will acknowledge before my Father in heaven; 33but whoever denies me before others, I also will deny before my Father in heaven.  34“Do not think that I have come to bring peace to the earth; I have not come to bring peace, but a sword. 35For I have come to set a man against his father, and a daughter against her mother, and a daughter-in-law against her mother-in-law; 36and one’s foes will be members of one’s own household.37Whoever loves father or mother more than me is not worthy of me; and whoever loves son or daughter more than me is not worthy of me; 38and whoever does not take up the cross and follow me is not worthy of me. 39Those who find their life will lose it, and those who lose their life for my sake will find it.”

Grace and peace to you from God our Father and our Lord and Savior Jesus Christ.

These days always remind me of my two wonderful summers as a counselor at Camp Nawakwa, a Lutheran church camp several miles north of Gettysburg. Sunday afternoon the campers would arrive and report to their cabin assignments. Some of them were regulars and were excited to get back to what had become a second home. Others, often but not always younger campers, were there for the first time, maybe a little anxious, a little scared. 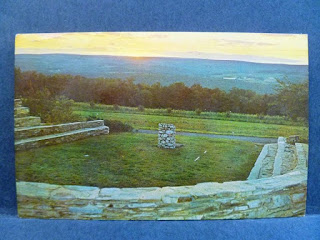 We’d play some ice-breaker games, herd them all into the dining hall for supper and then, given good weather, line them up in cabin groups for the trek to Upper Temple. Up through the woods we’d march in file, then through one of the apple orchards that cover the Adams County countryside. Finally, we’d cross a road and reach the stone amphitheater with its commanding view of the valley and the sun setting over the purple majesty of South Mountain beyond. And one of the staff would pull out a guitar, and we’d sing:

It only takes a spark to get a fire going

And soon all those around can warm up in its glowing

That’s how it is with God’s love

Once you’ve experienced it

You spread his love to everyone

You want to pass it on.

It was so easy, so simple, and so beautiful. The Lord is a Lord of love. He created this beauty, the wonderful people around, and the peace which flows from being in his beautiful creation. Who wouldn’t want to pass it on? And who wouldn’t want to receive this peace, this joy, this love?

Why would Jesus get killed for passing on God’s love? Because love is a terrible, powerful thing, and God’s love is even more powerful and terrible because it goes to the limit to rescue you from everything that would keep you captive to sin, death and evil. God’s love doesn’t pat you on the head and give you lollipops, it runs after you, it does battle with wolves who are seeking to consume you, it exposes itself to danger and death for your sake.

People who are anti-religious often point to the war and conflict religion causes. And you know what? They’re right. Jesus himself says in our Gospel lesson that his coming brings division – not peace, but a sword. It brings people of the same world, the same nation, in the same church, the same camp, the same family, into bitter conflict.

We might be forgiven if we say that given all this conflict, it is best to keep religion to the lowest common denominator. We could pat others on the head, and give them ice cream sandwiches, like we did at the camp store. The content of religion could be: sunsets are good. Purple mountain majesties are good. Apple orchards are good. No one’s going to get criticized for singing this:

What a wondrous time is spring, when all the trees are budding;

The birds begin to sing, the flowers start their blooming.

That’s how it is with God’s love –

Once you’ve experienced it,

You want to pass it on.

I’m not saying that spring, trees, birds, and flowers are bad. My point is that most people can agree on that. It’s not particularly controversial. There’s no decision to be made for or against spring, trees, birds, or flowers. But when Christ claims the kingship, we are confronted with the decision for or against? And if we are announcing Christ’s kingship, we are implicitly asking people the same question. No wonder there’s often pushback.

Jesus is teaching his apostles that the pushback doesn’t necessarily mean they’re doing something wrong. Since Jesus experienced it, they ought to experience it too. And Jesus is teaching his apostles that it does not mean that God has abandoned them or their ministry. Finally, they are to keep saying what they’re saying, even if it seems divisive, for Jesus didn’t come to pat others on the head and give them lollipops, he came to announce salvation from every power.

Of course, many Christian leaders can be divisive simply by being dismissive, by putting down those who disagree with them. That’s not the kind of divisiveness of which Jesus speaks. It is when the Word is spoken clearly and respectfully that it arouses the most opposition, for then it may be clearly seen that the Word is not the Word of person who is trying to manipulate you, but that in the Word God is claiming a human life for the kingdom.

The good news of the kingdom of heaven, that in Christ God is reigning here and now, is bad news indeed for those who would reign instead of God. But more than that, it is bad news for us insofar as we want to control our own lives, make our own decisions without hearing God’s Word, and be satisfied with our own righteousness. There is a resistance we all have to God’s Word that simply can’t be discovered until we run up against the one thing that reveals to us how bitter the Word is for our old self.

God’s Word says that we have no right to take revenge on those who have hurt us, or to nurse and feed our anger against those who do wrong to others. God’s Word says that we have no private right to those things that we call ‘our own,’ but are responsible to him for the use of our bodies, our words, our money and our time? God’s Word makes us responsible for others who don’t share our religious creed, national allegiance, family heritage or political beliefs. God’s Word talks about a God who has acted in and through a certain person and not in another way through another person.

To accept the claim means the pain of having to let go of the parts of your life which participate in the selfish being of the world. But then it also means the joy of being claimed for the kingdom, for God’s restoration of all things, for health and wholeness and forgiveness. One cannot have both, one must have either one or the other. Paul writes: How can we who died to sin go on living in it? Do you not know that all of us who have been baptized into Christ Jesus were baptized into his death? Therefore we have been buried with him by baptism into death, so that, just as Christ was raised from the dead by the glory of the Father, so we too might walk in the newness of life. (Romans 6:2-4)

That is why Jesus urges the apostles to tell the word in the light and shout it from the housetops. For as Paul says in Romans 1, ‘I am not ashamed of the Gospel, for it is the power of God for salvation for all who believe.’ It’s why Jesus was willing to die, to suffer pain in order to continue in the joy of the Father even against all opposition. And it’s why the Church continues to live in the Word and preach and teach it, even when it seems to go against whatever spirits of the times there are, even though it divides families and nations and even churches. For the pain of division is superseded by the joy of knowing God’s love.

And it’s why the song works after all. For the song in the end is not about a fire, or leaves, or birds, or flowers. It’s about the flowering of God’s love in our lives, the fire in our hearts that is kindled by the Spirit, and about the joy that brings, a joy that moves us to confess our faith before others, for the sake of the love of our Lord.

I wish for you, my friend,

This happiness that I’ve found;

You can depend on him,

It matters not where you’re bound.

I’ll shout it from the mountaintop;

I want my world to know

The Lord of love has come to me;

I want to pass it on.

Almighty God, whose most dear Son went not up to joy but first he suffered pain, and entered not into glory before he was crucified: Mercifully grant that we, walking in the way of the cross, may find it none other than the way of life and peace; through Jesus Christ your Son our Lord, who lives and reigns with you and the Holy Spirit, one God, for ever and ever. Amen.