Grace and peace to you from God our Father and from our Lord Jesus Christ. 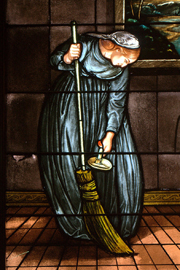 I physically feel something when I look at the picture to the left. I feel the tiredness of my eyes looking into the dim light of the house, lit only by the candle which I hold in my outstretched hand. I feel the strain of my arms as I hold the candle down lower to the ground. I feel its weight and the weight of the broom I hold in my hands. I feel the stress in my old back and my old neck as I bend close to the ground, scanning the floor with my tired eyes, the weariness of my heavy feet.

Patience is a virtue. It’s not one of my strengths. That’s not to say that I’m not patient with others. But to patiently and methodically and systematically look for something, going from place to place in the house, to find one thing. My brain is most likely going to be flooded with messages, ‘You’re never going to find it.’ I’m likely to get overwhelmed with the sheer variety of things in the house, and quickly distracted. I must admit that whenever I’ve looked at this parable of the lost, I’ve been most apt to think, ‘He’s got ninety-nine sheep! She’s got nine other coins!’

And it’s not even mostly about an object lesson, as if these images of careful searching should teach me how to be patient. It’s about the character of Jesus. About who he is. Why he is sharing his joy with others who have no right to expect it. It’s because he sees them as precious in the eyes of God. Why he will be willing to search them out, and to endure the stress of the journey and the strain of the cross to restore them to his Father.

This is what the scribes and Pharisees just don’t understand. They see these people as throwaways, as failures, perhaps even as active rebels against God. Perhaps they are. But Jesus doesn’t see that. He sees lost creatures, lost children of God, precious children who need to be found. These have been found, and so there is joy.

Because that’s what it’s for, right? The patience and the persistence and the strain and stress are for the sake of joy.

Maybe Jesus got through to them. Maybe one or two of them or even more got what he was saying. Maybe they grumbled a little bit less, they rejoiced a little bit more. Maybe none of them did. Maybe all of them, secure in their righteousness, were there grumbling when Jesus passed through Jericho on his way up to Jerusalem, and found another lost person, a tax collector to whom the Gospel of Luke gives a name: Zacchaeus. You remember, the little guy who climbs a tree to see Jesus because he can’t see him. But Jesus sees him and sees him as one of God’s lost ones. And invites himself over. And celebrates with Zacchaeus when he finally gets it and restores the money he’s gotten by cheating and gives half of the rest to the poor. Maybe they were all grumbling, but Zacchaeus too is a son of Abraham. ‘The Son of Man came to seek and to save the lost.’ (Luke 19:1-10)

As long as we are clear about that, we’re halfway there. For the Son of Man came to seek and save the lost. Jesus seeks us out like a tender shepherd, like a patient mistress of the house, and like a father who waits for both his wayward sons, the roving younger and the dutiful elder, to come home and live in the joy which belongs to them both. Jesus seeks us out so that we may live in that joy.

But that joy comes not without its costs. For part of living in that joy is to embrace living with the broad shoulders of the shepherd and the tired eyes and aching back of the mistress of the house. Jesus saves us for faith, for living in his kingdom, and that means celebrating with him but also ministering with him, searching with him. When Zacchaeus celebrated with Jesus in his house, it was not simply the end of a story but the beginning of a new one. You think tracking down all those people he’d defrauded and giving to the poor was easy? Stress, strain and maybe a few mistakes along the way – but we presume Zacchaeus kept at it because of the joy of which he’d tasted.

And having tasted joy, having been found, we embrace the life of faith – the life of the kingdom, with all its stress, strain and sadness, for the sake of the greater joy which is to come. Let us again taste that joy as we share peace, as we are found again at the altar. Let the sins of anger and impatience be quenched; the tired eyes be renewed; the aching back and neck be relaxed, the soul refreshed. There is work ahead, patient and slow, but for now and for ever there is joy.