It confronts us, lying on its side, when we come through the door for worship on Thursday night. After most of us leave, some of us haul it to the front of the church and set it upright in front of the altar. When we come back the next day, it is the only furnishing in the room. We cannot escape from it. It draws our attention, commands our eyes to look upon that which we would rather avoid, the sign of our rebellion and the suffering that rebellion caused God. 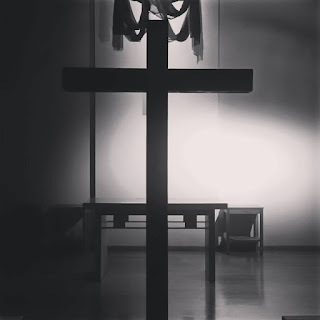 We hear of the suffering servant of Isaiah 52 and 53, who is not acclaimed but rather rejected, and yet by his suffering redeems those for whom he suffered.

We celebrate the victorious Lord of John 18 and 19, who turns Pilate’s questioning on its head, who carries his own burden to the Place of the Skull, who cries ‘It is accomplished,’ with his dying breath.

We sing of the Tree of Death which becomes, by God’s grace, the Tree of Life: ‘Behold the life-giving cross on which was hung the Savior of the whole world; O come, let us worship him.’

Faithful cross, true sign of triumph,
Be for all the noblest tree;
None in foliage, none in blossom,
None in fruit your equal be;
Symbol of the world’s redemption,
For your burden makes us free.

Do we see? God himself comes to us in the most unlikely of places. It has to be this way, if God is God-with-us. If God were god for himself, if he simply reigned above the world in blissful perfection, distant from us and to us, and he demanded that we must ascend to his perfection, then the cross would not be necessary. Indeed, it would be foolishness. But God in his wisdom, in his being-for-us, made it otherwise.

It is necessary, for we are all irretrievably caught up in this beloved but unholy world; a world of innocents being put to death and those who put them to death. It is necessary for God-with-us to be with us not where we are at our best, but where we are at our worst – the intersection of indifferent and corrupt religion, power politics, injustice and oppression, torture and humiliation, physical expiration. It is necessary for God to triumph over sin, evil, and death at the place where they would shout their victory the loudest. 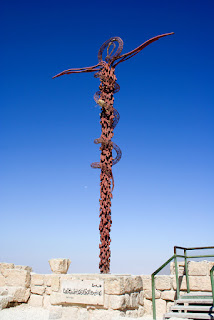 The serpent of death became the sign of life for the ancient Israelites. Wrapped up in their sin in the desert and afflicted by that sin, they turned their eyes to the serpent, seeing in that poisonous sign God’s inoculation of their disease. In that foreshadowing, we see the cross, and it becomes not death but life for us.
It is on Good Friday, confronted with the holy, life-giving cross, that we understand the fullness of what Jesus, the man-for-others, the God-with-us, says to Nicodemus: ‘Just as Moses lifted up the serpent in the wilderness, so must the Son of Man be lifted up, that whoever believes in him may have eternal life. For God so loved the world, that he gave his only Son, that whoever believes in him may not perish, but have eternal life. Indeed, God did not send the Son into the world to condemn the world, but that the world might be saved through him.’

Martin Luther says, ‘You must think only of Christ’s death, and you will find life…the image of grace is nothing other than Christ crucified, and all His dear saints…Christ on the cross takes away your sin and carries it for you and destroys it. That is grace and mercy. Believe firmly in it, have it before your eyes and do not doubt it. That is to behold the image of grace and form it in yourself…Thus Christ is the image of life and grace, and over against the picture of death He is our bliss and gratitude.[1]’

Thomas Traherne writes, ‘If Love be the weight of the Soul, and its object the centre, all eyes and hearts may convey and turn unto this Object: cleave unto this centre, and by it enter into rest. There we might see all nations assembled with eyes and hearts upon it. There we may see God’s goodness, wisdom and power: yea his mercy and anger displayed. There we may see man’s sin and infinite value. His hope and fear, his misery and happiness. There we might see the Rock of Ages, and the joys of heaven…’[2]

On this day, as on Good Friday, we turn our eyes to the Holy Cross, seeing there not the defeat of humanity, but the victory of God, We pray that we may always hold that cross, and him who hung upon it, before the eyes of faith until the day we enter into the fullness of the kingdom he has won for us.