I was in the local Wal-Mart a few months ago,
for some reason passing the jewelry desk.
I saw the collection of cross pendants there and stopped to look at it.
I’m not really interested in jewelry, but I am interested in crosses.
In some of the little boxes the crosses came in were short verses.
I leaned down to read one of the prayers, which said,
‘God grant me the courage to believe in my dreams.’

No.
Oh, no.
I wanted to die.
Or, more accurately,
I wanted the person who wrote that to die.
Well, not really die.
Not die as such.
Die to sin,
die to unbelief,
die to creating vapid, atrocious, blasphemous prayers.
Not die, die.

But seriously, how awful is that?
To make the God who created the universe,
the God of Israel,
the God of Abraham and Jesus,
to be a fairy godmother,
a wish-fulfiller,
an enabler of my dreams!
What dreadful ignorance!

So what is faith,
if it is not the courage to believe in my dreams?
Is it the intellectual assent to certain propositions about God,
God as Father, Son and Holy Spirit,
Jesus Christ as true God and true man?
Well, certainly it is that.
But that is not all there is to it.
It is to believe that God is who he is and has done what he has done
in order to bring us into communal and personal relationship with him.
This is why Luther’s catechism does not simply say,
‘God created all that exists,’ but ‘God created me and all that exists.’
‘Jesus Christ…is my Lord.’
The Holy Spirit…has called me.’
We are called not to have faith in our dreams, but in God himself,
for the sake of God himself. 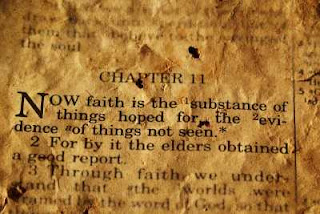 The letter to the Hebrews says,
‘Faith is the assurance of things hoped for, the conviction of things not seen.’
How is this different from that prayer which comes with the Wal-mart cross,
the prayer that God will help me believe that my dreams will come true?
What are we to hope for?

The hearers of the letter to the Hebrews would have known
exactly what the writer was talking about.
Every faithful Jew would have understood the hope of Israel,
that God’s vision for his people would be accomplished,
that all his promises would be fulfilled:
the day of redemption for all his people,
when they would live secure from all their enemies,
when justice would live among them,
and peace would be accomplished.
Those who received this letter
were faithful Jews who believed
that in the death and resurrection of Jesus Christ
God had made the promise absolutely sure.
But until the day when God’s kingdom was seen by all,
they were to live by faith in the unseen kingdom. 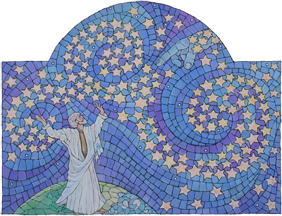 This is why Jesus tells his disciples to get rid of their possessions,
not simply because they will not need them in the age to come,
for if that were all that were true,
we might keep them all
and devote our lives to collecting and improving them until the day we die.
But we are called to reject trust in posessions
because the faith we have in them now
is opposed to the faith in the world to come.
Because too many possessions makes us unable
to hear God’s promise and act accordingly.
Because where we put our treasure in this world
dictates how we live in the world,
trusting in God, or in other things.

It is quite doubtful that many people
dream of giving up self, time, and possessions
in order to hear and obey the command and promise of God!
But this is what Jesus called his disciples to do,
what he calls his faithful people to do.

We are people who are on the way somewhere;
like Abraham, on his way to inherit a land,
like the Hebrews, on the way to an eternal city;
like the disciples, on their way following Jesus.
If we are to get up and move,
in order to be on our way,
we may just need to leave some things behind.

Not exactly the stuff of
‘God grant me the courage to believe in my dreams!’
But maybe, just maybe,
if we change just one word,
we could have a good prayer;
a God-fearing prayer, a God-pleasing prayer.
What if we prayed,
‘God grant me the courage to believe in your dreams!’
This is a prayer of a person, of people, on the way,
a prayer Abraham might have prayed,
a prayer of faith,
looking forward to what God promises,
and living as if it were already reality:
for what God promises, he surely will fulfill.