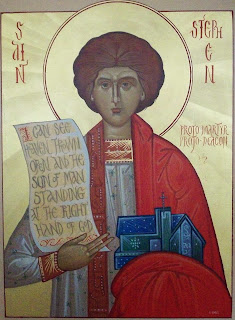 Acts 6:1-7
The First Martyr:
Acts 7:54-60
'The birth of Jesus is more than a commemoration of his birthday. His birth into this world prefigures the birth into the next world of his martyrs, who follow in his train. The birth of Christ is a judgment on the persecution and rejection of God and his word, and means joy for those who remain faithful and steadfast even in the face of great persecution. These are days of judgment as well as joy.
'On what in Germany is called 'second Christmas day,' the church celebrates another birth, the birth into heaven of Stephen, the first Christian martyr. His feast day is yet another way of declaring the church's confidence that the outcome of the Christian struggle is certain. It is a further testimony to the kingdom made ready for God's epople, prepared now for those who would 'take it by force' (Matt. 11:12).
'Stephen, who, Luke reports, was 'full of grace and power and did great wonders among the people,' was the first of the band of martyrs to follow Christ through death into life and is therefore sometimes called 'Proto-martyr.' His devotion to the faith, his love for his persecutors, and his dramatic death by stoning that is reported in detail in Acts 6-7 make this deacon and martyr a much-revered figure among the saints.'
- Philip Pfatteicher