Grace and peace to you from God our Father and our Lord and Savior Jesus Christ.

To enter into a covenant is to bind oneself by one’s word;
to let the word that is spoken in the present moment determine the future.
Last week we heard of God’s covenant with Noah,
that the human race, sin and all,
would continue on the earth.
Genesis tells us that rather than flood the sin of the world out of existence,
destroying humanity in the process,
God would be patient with sinners,
finding another way to deal with the sin and evil of the world.

Today we hear of the covenant
God makes with Abram and Sarai;
a covenant which God makes not only with them,
but with their descendants after them.
Abraham and Sarah will have a child,
and not just a child,
but a child who will have children who will have children,
until many nations and kings all trace their existence
to an ordinary man and woman from Ur of the Chaldees,
and these childless until old age.

Like the covenant with Noah,
this promise is totally God’s own,
and it determines the future.
Abraham and Sarah surely don’t determine the future.
If it had been up to them,
there would be no future at all for God’s people –
indeed there would be no God’s people.
It was not because Abraham worshiped God
that God made a covenant with him;
after all, Abraham was a heathen until God called him.
Genesis reveals Abraham and Sarah to be people with very little to their credit.
Sarah laughs when the messenger tells her that she will have a child.
Twice Abraham lies and calls Sarah his sister
to save himself from being killed by a king who may desire her.
Both of them are crafty individuals.

But Paul looks back to Abraham as his spiritual ancestor.
This crafty individual,
can he really be the exemplar for the ultra-religious, ultra-scrupulous Paul?
Certainly Paul is descended of Abraham’s family according to the flesh.
But this is not why Paul looks to Abraham as model.
Paul, like Abraham, had been called into a covenant,
a covenant which he did not choose.
Like Abraham, Paul had received a promise,
not because of his own worth or accomplishment,
but because God spoke a word by which he bound himself.
And, like Abraham,
Paul could do nothing about it
except cling to this word and promise.
This is what the Bible calls ‘faith.’ 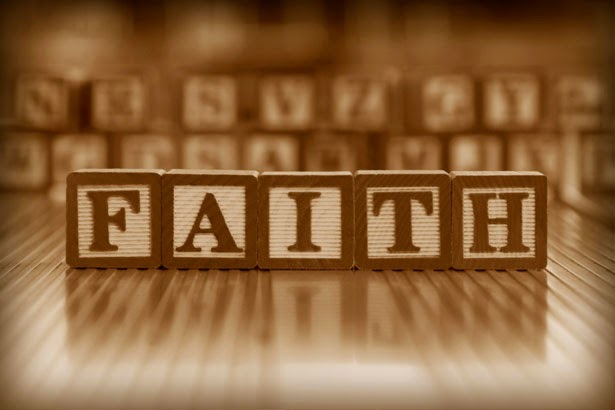 Often we use the word ‘believe’ in connection to faith.
This English word ‘belief’ is a little bit problematic.
We usually think of ‘belief’ as ‘knowledge,’
when we acknowledge that something happened or something exists.
As in ‘I believe that in 1969, human beings walked on the moon,’
or even ‘I believe that there is a God.’
But the belief that Paul is talking about, this faith, is not simply an intellectual matter
but a matter of the heart.
It is a trust that comforts and encourages us,
a trust that God has made, is keeping, and will keep his promise.
So when we say in the Creed, ‘I believe in God, Father, Son, and Holy Spirit,’
we are not saying ‘I’m not like those atheists who don’t think there’s a God.’
Instead, we are saying, with the Church,
‘This is the God in whom I put my trust, to whom I belong,
whose Word and promise I depend upon.’
This is why the Creed follows the readings, the Sermon, and the Hymn of the Day.
It is a response in faith to the God who has been proclaimed there.

So we are called to trust in God.
And yet we are right to be annoyed when the ultra-religious say,
‘Oh, I have such strong faith in God,’
or, ‘You just have to trust God.’
There may be a time to say that kind of thing,
but it needs to be done in great humility.

But if we honestly look at our lives,
the truth is that we don’t find a lot of trust there.
We find a lot of running, a lot of resisting,
a lot of doubting and a lot of telling God how to run the show.
Much like Peter.
Even after just having told Jesus that he was the Messiah,
Peter was so ready to contradict Jesus when Jesus said something
that Peter didn’t expect he should say.
Even though Peter ‘believed,’ he couldn’t yet ‘believe.’
Peter was ready to say that Jesus was the Messiah,
but Peter couldn’t trust that word of Jesus
that he should suffer and die and be raised from the dead.
None of us could.

So if we look at our trust in God and find it lacking,
we understand that Peter and Paul had to learn too.
As we’ve heard, so did Abraham.
So how do we obtain faith and trust in God,
a faith which shares in the faith of Abraham?
Only one thing we can do,
keep hearing the promise.
For the word of the promise itself
creates faith in that promise.
That is why Christians do not come to church for a while
and then decide they have enough faith,
or finish a class
and then say,
‘Well, I’ve learned everything I need to know.’
Or they don’t get confirmed
and then think that they have ‘graduated.’
By ourselves, without the Word of promise,
we will so easily forget;
we will put our trust and hope in louder voices
which promise the present
but which can do nothing for the future.

But when we come to hear the promise
week after week,
we confess that we need it,
that we need Jesus himself to speak faith into us
so that we may cling to him for everything good
and be protected from all that is evil.
As Abraham, Paul, and Jesus lived by faith
that God was faithful,
so do we.
Great is his faithfulness!