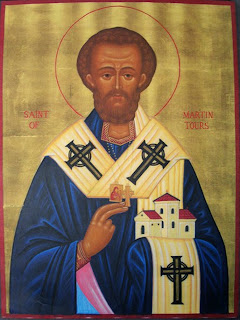 In addition to being Veterans' Day in the United States and Remembrance Day in the Commonwealth of Nations, today is Martinmas, the feast of St Martin of Tours. Martin was born in 316 in present-day Hungary. Drafted into the army at age fifteen, he found his own ideal of the Christian life hard to reconcile with the duties of military service. Eventually, he decided to be baptized and asked to be released from the army, being released when he was twenty years old.

He met with Bishop Hilary of Poitiers, in France, and decided to join him in his defense of Orthodoxy against Arianism. Martin led a hermit's life outside of Poitiers, but his fame grew and a semi-monastic community coalesced around him. When the see of Tours became vacant in 371, the people of Tours insisted that Martin become their bishop.

According to Philip Pfatteicher in New Book of Festivals and Commemorations, 'Bishop Martin lived in a cave in the cliffs of Marmoutier, two miles from the city. His office space for the work of the diocese was a hut nearby. The new bishop's way of life was quite different from that of his fellow bishops in other cities, but he succeeded in establishing Christianity in rural areas of Gaul; previously it has had been limited mostly to the cities. He traveled all over his vast diocese carrying the Gospel to peasants and tribespeople, fighting paganism, and setting up centers of Christian life and faith...During the Priscillianist controversies in Spain and Gaul (Priscillian, charged with practicing magic, was executed by Emperor Maximilian in 386, the first instance of capital punishment for heresy in the history of the Church), Martin strongly opposed the sentence and raised important questions concerning the relations between church and state.'

Perhaps ironically, considering his conscientious objection, Martin is a Roman Catholic patron saint of soldiers, making Veterans' Day an appropriate match of a national holiday. He is also a patron saint of beggars because of a legend which involved him dividing his cloak with his sword to give half to a freezing beggar.