Sermon - Seventh Sunday after the Epiphany

In our first reading from Leviticus,
we hear God telling Moses to say to the people,
‘You shall be holy, for I the LORD your God am holy.’
The people of Israel are to be the holy people of a holy God.
By extension, we, who are brought into the renewed Israel,
the Church of Jesus Christ, by baptism,
are also called to holiness.
But what does it mean to be holy?

Many people associate holiness with holy objects.
When a priest pronounces a blessing,
something or someone becomes holy.
An altar is holy. The bread and wine of communion are holy.
Many of you grew up with holy water.
Perhaps we are supposed to be like that.
Special. Almost glowing with an ineffable, intangible light.

Or perhaps holiness is the unearthly power of God.
Remember the movie Raiders of the Lost Ark,
when the Nazis open the Ark and a beautiful angel comes out?
Suddenly the angel transforms into the angel of death.
Lightning shoots out of the ark,
and the Nazis’ heads explode.
I don’t have the power to make people’s heads explode.
At least I don’t think I do.
Maybe I’m not holy enough yet.

Or perhaps holiness is equated with a moral purity.
Such people hardly seem to live in this world,
for they are constantly occupied with thoughts of God.
Even if they are non-judgmental people,
they give off an aura of otherness that makes it seem
that it is impossible to measure up to their standard.

Others associate holiness with an aloofness from the world.
These so-called ‘holy people’ are people who very rarely laugh,
who are quick to let you know that they don’t approve,
of you or the way the world is.
Their lives seem to be all put-together,
and your life pales in comparison.
You don’t share much with them,
because they don’t listen and are always ready to tell you what they think.
They are so ‘holier-than-thou’
that they can actually turn people off from God.
I am not sure that this is what God means,
but Jesus does say, ‘Be perfect, as your heavenly Father is perfect.’
Aren’t we to assume that a spiritual perfectionism
and a dissatisfaction with anything less
should be the mark of a holy people of God?

To be holy as God is holy
is to be set apart in some way.
But how is one set apart for God’s purposes?
If none of the above definitions bear fruit for us,
then what does it mean to be holy?

In his commentary on the book of Leviticus,
author and Episcopal priest Ephraim Radner
suggests that rather than defining holiness
to be a numinous quality
possessed by God, godly objects, and godly people,
we rather should understand holiness
as the description of how God wills to act with respect to his creation:
by coming to his creation with his whole being.

The holy God is not of this world, and stands apart from the world.
And yet God gets himself involved –
God comes close to this world and its creatures:
in the creation, in the call of Israel,
and most clearly in the self-giving of himself in Jesus –
in the Incarnation, in the Crucifixion, and the Resurrection.

Holy objects are so because they participate in the reality
of God’s otherness but also God’s being-for-us.
Every fall we celebrate Holy Cross Day.
The wood of the cross upon which our Lord was crucified
was not ‘holy’ in itself,
in the sense of having a certain indefinable quality of godliness;
rather it becomes holy because as a part of God’s creation,
it participates in God’s holiness,
the cross itself, an instrument of torture and death,
becomes a symbol participating in God’s loving embrace of humanity.

So if holiness is to be defined as God’s orientation toward the world in love,
then to be holy people and part of a holy people
means participation in that love.
It is a double movement,
pulled away from the world toward God
in response to God’s love,
and then to be sent back toward the world as a sign of God’s love.
Certainly an uncritical embrace of the world’s values is not implied,
but neither is a rejection of others.
Instead, those who are called to be holy
are oriented toward others;
precisely for the sake of the one who calls them to live for him alone.

This is where our Gospel lesson comes in. 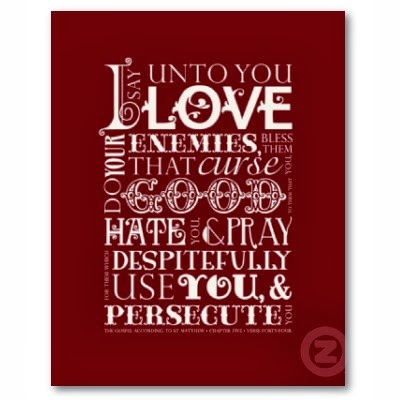 Jesus’ call to nonresistance
and love of enemies
has been criticized by some
as an inhuman possibility.
How is it possible to love others
who hate you?
Is it right to love those who hate you?
Perhaps it is in order
to win them back as friends,
and this can certainly happen.
But love for enemies must be more
than a tactic to get what we want,
because Jesus does not indicate a point at which we may give up
and go back
to the time-honored attitude of hatred.

Instead love for enemies must be a response to the character of God.
In the sending of the blessings of nature
indiscriminately upon good and evil alike,
God reveals his character as the God who loves his creatures
even when they do not care for him.
In Christ’s self-offering upon the cross for sinful humanity,
God reveals his character;
he is the God who limits himself,
the God who suffers in Christ for those who reject him,
for those who repent and those who do not repent alike.

Many wish to immediately argue the point with Jesus
by bringing up just war theory
and whether, for example, America should have just let the Nazis and Japanese
steamroller them in World War II.
But before arguing this complex point,
we ought to start with the simpler situations  –
disagreements within the church community,
those who offend us in the local community,
family members who are estranged,
political leaders with whom we disagree,
even those who write and say things critical of our faith.

Is it easy to love people such as these?
No, and not every situation requires the same response.
It is not necessary for the child who has been abused
to put herself or himself
back in a position of vulnerability in order to pray for that person.
It is also not necessary for us to agree with everything somebody else believes
in order to love that person.
In fact, love for the other is actually love for the other,
in that the other is a person you do not and cannot control,
in much the same way that God does not control us
but instead in freedom seeks to meet us.

To love one’s enemies is indeed an inhuman possibility.
It is inhuman in the sense that it does not come naturally to us.
It is only because Jesus Christ speaks the Word to us
that we are able to begin to love our enemies.
And we can make a beginning, every day.
When Jesus says, ‘Be perfect, as your heavenly Father is perfect,’
he does not thereby call us to a perfectionism which is unattainable,
but instead to walk with him on the road to perfect, undivided love,
one which does not distinguish between persons,
but instead treats each person as unrepeatable, irreplaceable, holy,
a person for whom God reached out in love
and therefore one to whom we may reach out in love as well.